This Week: Results from Trinity Biotech, Diaceutics, Lufthansa and Accenture 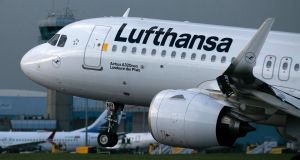 Lufthansa are due to file their results, but the focus for aviation is on the immediate future

Diaceutics, the Belfast-based data analytics company, will report preliminary results on Monday, not long after it issued a trading statement saying it had exceeded 2019 expectations.

In mid-January, the company’s notice of what was to come saw its share price rise over 13 per cent.

The company, which provides services to the global pharmaceutical industry, also said that earnings for the full year to end-December would be above £2.1 million, a rise from the £1.5 million.

The secret to this recent success, it said, was a strong trading performance in the final quarter, an increase in client numbers and accelerated sales growth.

“2019 was a key year in expanding our global footprint and deepening our service relationships with key clients and their therapy brands,” chief executive Peter Keeling said at the time.

It is of little surprise that Monday’s meeting of European finance ministers will focus heavily on the Covid-19 outbreak and its potential effects on economies – the question is what surprises the virus will have in store for them.

By the time they talk, the extent of the outbreak and its ongoing harassment of financial markets will have developed further. Planning for unforeseen consequences is difficult although the 2008 crash will at least have given Europe a taste of what can happen and what can be done to soften any blows.

“Given the potentially significant impact of Covid-19 on growth, including through the disruption of supply chains, we are committed to coordinate our responses and stand ready to use all appropriate policy tools to achieve strong, sustainable growth and to safeguard against the further materialisation of downside risks,” the group said in a statement at the beginning of the month when it became apparent coronavirus would be a fixture in the economic world for some time to come.

Its scheduled mid-March meeting, it said, would reassess the situation “commensurate with the developments, as they unfold”.

What has unfolded already? Last week the Irish government announced plans for a €3 billion package to help cope with the public health and economic costs. It is a full frontal financial assault on the virus but it, and the Eurogroup’s response, will be difficult to measure at this early stage.

By this day last week shares tumbled globally amid fears of a global recession. European companies had lost about $3 trillion in value since such concerns sparked a worldwide sell-off in February.

The Economic and Financial Affairs Council meets on Tuesday.

It is a grim time for Lufthansa. The German carrier’s full year results on Thursday will be overshadowed by the unimaginable problems facing the sector. The coronavirus, whose reach will spare no corner of the business world except perhaps retail grocery, is now the single biggest existential threat to the industry since the September 11th attacks in 2001.

Earlier this month, as airlines began to cancel various routes and address the financial uncertainty, Lufthansa said it was considering grounding its entire fleet of A380 superjumbos. It also began plans to cut up to half its flights from April due to a rapid fall off in bookings.

Alongside Air France KLM and Aer Lingus-owner IAG, Lufthansa stock plummeted in the wake of the US travel ban on passengers from the Schengen Area.

1 Majority of employees don’t want to return to pre-Covid working patterns
2 Homeworking is depriving me of juicy gossip
3 Investors in Irish solar energy fund in line for €20m payout
4 Tobacco giant’s menthol-ban substitutes take 5% share of Irish market
5 Norwegian airline sued in Dublin by inflight caterer
6 If tourists are such pariahs should we not be testing them on arrival?
7 Varadkar and Donohoe to meet banks to discuss mortgage breaks
8 ‘My rent here is so low it’s a joke’
9 Construction activity rebounds as sites re-open
10 Goodbody’s planned €155m sale to Bank of China falls through
Real news has value SUBSCRIBE