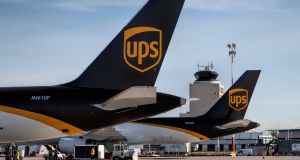 Sources at UPS suggested that jobs in the company’s accounts department in the Republic had moved to an alternative location in eastern Europe. Photograph: iStock

Sources at the company suggested that jobs in the company’s accounts department in the Republic had moved to an alternative location in eastern Europe, although the company did not confirm this.

“We are constantly evaluating and epitomising our network and processes to properly position our company for the future and ensure our customers continue to receive the highest levels of service,” a spokeswoman for UPS said.

The delivery company decided on July 11th to “streamline some support functions”, a decision that will ultimately affect 150 of its staff. “Wherever possible, we would like to retain the depth of knowledge and experience of our people, and we aim to redeploy as many impacted employees as we can,” the spokeswoman added.

“We anticipate the remaining changes to be implemented in the coming months, and customers will continue to receive the same high quality of service they have always experienced with UPS,” she said.

The company has several bases across the capital and employs more than 1,200 people in the Republic.

Separately, drivers and warehouse staff at the company withdrew a threat of industrial action and agreed to a UPS offer in December of a pay rise of between 3 per cent and 3.5 per cent in addition to an extra day of annual leave after 10 years of service.

Accounts for the local arm of UPS relating to 2018, the most recent year for which figures are available, show that the business posted a €56.4 million turnover in the year and recorded €1.3 million in profit before tax.