Elite architects of Brexit are safe, far behind the front line

While billionaire backers of the Leave campaign will make money either way, it is the young who will pay the price 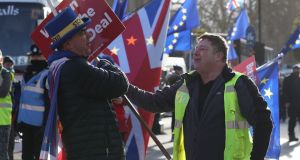 A Leave supporter arguing with a Remain supporter outside parliament in London.The police have been “briefed to intervene appropriately” if the law is broken. Photograph: Jonathan Brady/PA Wire

‘Corpulent generals, safe behind lines” is a line taken from a song Children’s Crusade, written by British rock star Sting in 1985. Those lyrics capture the idea that history repeats itself: young people are often the victims of high-stakes political games played by old men. Men who often are immune from the consequences of their actions. And perhaps able to profit from them.

Listen to prominent hedge fund billionaires bemoaning the death throes of their beloved Brexit project. Marvel at all the members of the double-breasted class leading a life far removed from the battles they thrive on.

Whether Brexit, in any of its multiple forms, happens or not is of little practical import to these kind of men. It’s a blood sport with no risk to the generals. Just a bit of fun, really. A game where real lives, particularly young ones, are damaged.

Britain was this week gripped by TV docu-drama about the Brexit referendum. The Leave campaign was masterminded by an eccentric genius called Dominic Cummings. Brexit was revealed to be a game between posh people like him who had mostly been to school and Oxford together; many of them express their anti-establishment credentials by refusing to tuck in their shirts. Having started the revolution – no matter how unexpectedly – they now feel they have to finish it.

Brexiteers, bemoaning the chaos they created, drown their sorrows with a glass of something made in countries they loathe. That their fine imported wine has recently gone up in price is of no consequence. The cost of claret rose after sterling’s fall. Brexiteers saw that one coming. So some of them made money betting on a fall in the pound.

The most reasonable, articulate backer – actually the only one – of Theresa May’s Brexit deal is Rory Stewart. Ironically, or perhaps appropriately, he is the prisons minister. He hit the airwaves in recent days arguing that the least damaging path forward is for the House of Commons to pass the withdrawal agreement. It’s a pragmatic perspective made by an obviously decent man.

So, the only pro-Brexit argument left is that the political fallout from cancelling the whole thing – or, indeed, from any of the available options – will cause more harm than merely soldiering on.

Similar assertions were made each time British teenagers were ordered into battle at Ypres or the Somme. As a metaphor that may, literally, be over the top but, in any event we are a long way from “taking back control” or the sunny uplands promised by the Leave campaign. And the victims will once again mostly be young.

Historians still debate the causes of the first World War: long before that conflict was over few could remember why it had started. So it is with Brexit. The last thing that could ever be admitted is the truth: the sheer bloody lunacy of the whole thing.

Cabinet minister Liam Fox once asserted that a trade deal with the EU would be “the easiest in history” to negotiate. That’s redolent of the assertion made in 1914 that “it will all be over by Christmas”.

It’s a constant refrain: the country voted for Brexit and anything less will be a betrayal of democracy. The enemy must be defeated at any cost. The enemy is anyone who thinks that the original referendum was based on lies and was rigged: what was voted for bears no resemblance to anything now facing the British electorate.

But the political damage has already been done. Identity politics now dominates and the culture war is raging. Brexiteers, far from the front line, prod their troops into threats of civil disobedience or worse. Perhaps this is what Stewart fears. I worry that his admirable calls for pragmatic compromise are indistinguishable from appeasement. Stewart and like-minded reasonable people should realise true Brexiteers will never compromise.

Thugs parade in front of the Houses of Parliament harassing MPs with ugly, barely disguised threats of intimidation and violence. Apparently we need to pass the withdrawal agreement in order to make sure these fascists don’t get even more upset.

Brexiteers now attempt to devour each other as much as their opponents. Unlike the French Revolution, this appears to be happening before the actual event: Brexiteer Tory MPs are now threatened with deselection by their constituencies because of a lack of ideological purity. Counter-revolutions normally happen after the revolution, not before.

Noticing that the vanishingly small number of actual members of the Conservative party – those who will decide who is to succeed May – are mostly fanatical Leavers, cabinet ministers like Jeremy Hunt and Sajiv Javid compete to burnish their hard Brexit credentials. They want to be the next prime minister. At any cost. I wonder if they hum the Ride of the Valkyries as they warm up before their ever-more extreme pronouncements.

The race to the bottom of the political cesspit is almost over; the winners will be known soon enough.

I expect a new Blackadder series is already in the making.