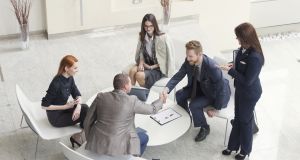 “During the boom it was all about recruiting high-level stand-ins. Now it’s about using an interim manager’s skills to deliver business-critical objectives.”

Interim managers are the flirts of the C-suite. They go into an organisation for a short period of time to fill a particular role or take on a specific assignment and before things get serious they move on to a new relationship.

The key difference between an interim manager and a consultant is that he or she becomes a member of the client company’s management team. They are there to determine and implement solutions not give advice.

Interim managers operate across all sectors, and their skills cover the entire business spectrum from strategy and organisational restructuring, to finance, technology and HR. Their assignments typically last from weeks to months, but some can run for longer.

Most interim managers are aged 45+ and have a strong track record in business. Many have cut their teeth as senior managers within large, multinational organisations and their decision to step off the ladder is often taken for personal reasons. Some want the freedom of working for themselves. Others are fed up living out of a suitcase. A third group want the buzz of a challenge, but not 12 months of the year.

Interim management thrived during the boom when talent was scarce and companies needed to plug short-term gaps in their management structures. However, this has changed according to John Kelly, a 20-year veteran of the sector who runs IndEx Partners, an offshoot of executive headhunters, Merc.

“This could be due to very strong growth or because they want someone with deep-dive expertise in a particular area such as big data, digital transformation or mergers and acquisitions. Sometimes companies don’t have the people, the skills or the capacity. Sometimes it’s all three.

“Most interim managers have ‘done it all before’ so they hit the ground running and deliver value from day one. What often motivates them is the high-octane challenge of solving a particular problem, and when it’s resolved and it’s back to business as usual, they want to move on to the next one.”

Interim managers are usually paid by the day and rates vary, but Kelly says it’s “in three or early four figures. That might sound a lot, but it’s comparable to the total cost of a permanent hire and more competitive than a consultancy rate,” he says.

Pat Byrne is founder and chairman of Caim (Chartered Accountant Interim Managers). He set up the organisation in 2010 and his own area of expertise is operational risk and regulatory compliance. He echoes Kelly’s view that interim management has changed a lot since the recession.

“The traditional ‘full-time at one client for an extended period’ model of interim management is now a very low-volume market,” he says.

“Our network has moved towards a more flexible resourcing model where in addition to doing specific tasks for one company, we will also work on a part-time basis for a number of clients who only pay for our skills/expertise as needed.

Byrne says one of the issues facing interim managers is getting fair reward for their work. “Day rates were hit in the crash and are still low, and it’s an uphill struggle to make them more viable,” he says.

“Executive salaries are now back to where they were before the crash and higher in some cases. Companies need to become aware of how much a senior hire really costs when you factor everything in. What you get with an interim manager is a senior executive with skills and a track record, not a junior from an outside firm or consultancy with less experience that costs more.”

James Shivnan spent 20 years with global management consultants, Bain, before becoming an interim manager. He is on IndEx Partners’ books and his most recent assignment began last August.

“My expertise is in developing and managing strategy processes, and that’s what’s involved here,” he says. “We are looking at the overall vision for a large and complex business – where it wants to be in five years’ time and what needs to happen to get it there. This involves working with between 60 and 70 people from throughout the organisation.

“I enjoy the process because you are a team member working on a company’s strategy, not an outsider trying to impose anything. In turn they appreciate the experience and knowledge you have. I like the variety interim management brings and also the flexibility, which gives you the option of taking downtime to recharge your batteries.”