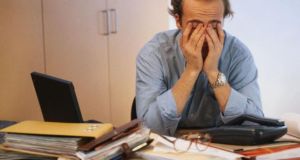 Seventy per cent of employers invest in “leadership development” for employees with less than five years’ experience and generally believe they have effective plans in place to mould future potential.

Irish employers continue to use “gut feeling” to hire people over more reliable methodologies, a survey of leaders has found.

The Talent Leader Pulse Survey 2017 – supported by The Irish Times Executive Jobs – has measured various leadership and employment trends in companies and outlines the key priorities for the year ahead.

A poll of 185 “talent leaders”, designed to identify HR challenges, directs much of its focus to the notion of modern-day leadership, particularly among the millennial generation.

Seventy per cent of employers invest in “leadership development” for employees with less than five years’ experience and generally believe they have effective plans in place to mould future potential.

However, fewer than one-in-five (18 per cent) believe these approaches are “very effective”.

Following from this, two-thirds of employers (67 per cent) don’t utilise analytics to help in hiring the right people or talent.

“Although people analytics is a growing space, the use of sound analytics when hiring still has some way to go,” the survey notes.

“Use of analytics is critical to understanding ROI [return on investment], not just from a quality and/or cost optimisation perspective but [it is] increasingly critical when it comes to deciding on automation/artificial intelligence versus human deployment.

“Understanding the balance between hearts (cultural fit) and minds (data-driven) is critical to delivering a total talent acquisition strategy.”

The survey also found changes in the work environment, noting in particular how “hierarchal models” are being replaced with teams built around experts, and capable of becoming more agile and responsive.

There is a shift here towards “flatter” organisational structures; a rising demand for autonomy among employees and a desire to be self-directed through flexible hours. While this type of system requires goal-setting and incentives, only a quarter (27 per cent) of employers do so.

In terms of diversity, 60 per cent of companies have a strategy to promote inclusion while exactly half of participants said gender balance is part of their strategy. Of top priority for the year is retaining talent, followed by attracting it in the first place. In a detailed list of aims for the year, employers also identified the need to create a high-performance culture and develop leadership and succession.