Flour powers Limerick engineer to a life baked in Brooklyn 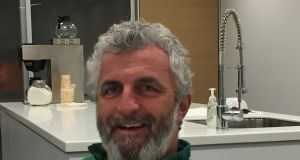 US-based Irish businessmanTom McCarthy supports “fair and legal” immigration. “Let people in. People who want to come here want to work, they want to make money and that will drive the economy. Immigration is good for business.” Photograph: John Breen 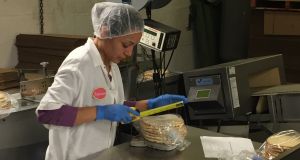 Tom McCarthy, from Limerick, lives in Babylon, Long Island, and runs a bakery in Brooklyn.

The day we meet he has to push back our appointment because there is a robotics firm pitching for business and a plant inspection by one of his clients. As I approach the Aladdin Bakers factory, a big tanker is pumping what I later discover is flour through a nozzle in the wall. That can happen as often as four times a day as the plant uses 450,000 pounds of flour a week.

Tom trained in manufacturing engineering and worked at Verbatim for a while before leaving Ireland on a Donnelly visa that he had forgotten he had applied for years before.

“It felt to me then [in Ireland] that it was really about who you were connected to, whose son you were or who you knew. My father was a creamery manager from Cappamore so he didn’t have a lot of connections in the electronics manufacturing industry, so I left. I arrived in New York on January 1st, 1990. One day later and my visa would have been useless.”

What he also didn’t know was that the investment group that had bought the business had cleared out half the management and staff, a group that took all their institutional memory with them. It was a steep learning curve.

It turned out to be a profitable transaction for the investment group; it bought the firm for $14.5 million and sold it six years later for $70 million. A lot of that added value came from Tom’s operations brain and smart acquisitions.

The group bought a breadcrumb factory in Detroit and moved the plant to its factory in the Bronx. As Tom describes it, his job was “to keep the wheels on the bus”, expanding the range of products it was manufacturing and constantly getting more efficiency out of the factory.

The company was sold again in 2010 and this time Tom moved on. Now he works with Aladdin Bakers, maker of the Baked in Brooklyn brand.

Because of the limited footprint, he has had special equipment designed that moves the production line up two storeys and then loops it around and around itself like an Escher drawing, finally returning to ground level to be packed and boxed. There are metal mezzanines all over the factory where he has added more machines.

He is constantly pointing out huge pieces of equipment, showing me little modifications they have made to suit their particular purpose at Aladdin. The plant runs 24/7 and has 200 employees. The staff are mainly involved in delicate tasks involving judgment and experience.

On the day I visit, the bakery is making pitta breads, bagels, burger buns, baguettes and crackers. The smell is beautiful but Tom no longer notices.

We pass a huge box on the factory floor. It contains a a 25-ton chain that they must replace on a machine that weekend. “We take on big jobs and we don’t scare easy,” says Tom.

There is very little flour around I notice. Tom explains that it is highly flammable when mixed with air so it is distributed by pipes from the huge tanks that take delivery a few times a day. “Flour is our oxygen,” he says, “we can’t waste it.”

“I was travelling so I didn’t get to vote but I would have voted Trump. It was a case of choose your poison. At times, with the amount of regulation, I feel they don’t want us here in New York.

“Minimum wage? Great, but make it a national minimum wage. Make it $20 but make it for everyone, otherwise I am competing with people in New Jersey who don’t have the same costs as me!”

Fairness is a theme he returns to with with immigration.

“Make it fair, make it legal. Let people in,” he says. “People who want to come here want to work, they want to make money and that will drive the economy. Immigration is good for business.

“Ireland has the opposite problem. There were 26 engineers in my graduating class and only three of us stayed. Those 23 people, had they stayed, would have created jobs, God knows how many, but there was nothing there for us.

“I went back a few times over the years to suss out whether I could make a go of it, but I never felt the same room for growth as I do here. I know it’s a cliché but this is the land of opportunity if you are not afraid of hard work.”