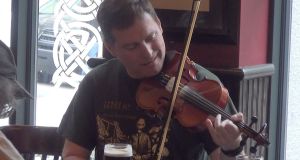 Ronan O’Driscoll at one of his regular pub sessions in Halifax: “Nova Scotians are friendly and genuine, but it can be a surprise to find that it only extends so far.”

Ronan O’Driscoll was 12 when he first emigrated: His father moved the entire family from Kerry to Chicago when he was appointed head of a division of Kerry Foods, marketing and exporting casein into the US.

After spending his teenage years in Chicago, O’Driscoll moved back to Ireland to complete his university education. He took a masters in English and philosophy at UCD, but found, on completion in 1995, that he had to leave Ireland to use his degree.

“I went to Japan for a couple of years to teach English on the JET program,” he says. “I met my wife Lisa there, a fellow teacher and a Canadian. We were married in Japan. And Canada. And Ireland.”

The O’Driscolls settled in Ireland in 1999, during the tech boom. He took a six-month diploma in programming and ended up teaching the same course the following year.

“There was a huge need for skilled people,” he says. “Such a demand that I became a full-time developer at Curam Software. Lisa and I would get up at 5:30am to pack our first born into our little Toyota, and crawl along the M50 from our overpriced house in Skerries to get to the creche and work in Parkwest.”

A visit to in-laws in eastern Canada – and a cursory glance at house prices – spurred the decision to move to Halifax, Nova Scotia in 2005. O’Driscoll quickly landed a position as senior software engineer at Master Merchant Systems.

He has been a full-time developer ever since, occupying increasingly senior roles and working in different sectors. “I’ve moved around companies, largely because I wanted to try something else.”

In 2010, O’Driscoll took his first time out from development to try management as assistant director to the web team at Dalhousie University in Halifax. Two years later, he took the position of senior programmer at Unique Solutions Design. A year later, he moved to Introhive as a software developer, largely working remotely.

“The economy in Halifax is relatively stable and there’s a shortage of skilled tech workers,” O’Driscoll says. He found personal contacts helped because employers like to see a track record locally.

“I’ve been a senior software engineer at Ping Identity since 2014. It’s a leading company in securing people’s identity online and a great place to work, with its headquarters in Denver. It’s nice to be part of product development for a bigger company while living in Halifax.”

The weaker Canadian dollar and provincial payroll tax rebates make it attractive for US companies to set up subsidiaries outside the country. There is one downside, he warns: “It was a shock to settle for 10 days ‘vacation’ when we moved over first.”

Otherwise, he doesn’t see huge differences between Canada and Ireland, particularly in terms of business culture. “One thing that has struck me is the low number of women working in tech in Halifax. Dublin has a far healthier ratio.”

Halifax is about the size of Cork and is the biggest city in Nova Scotia. It has a very distinct culture, similar to Ireland and, of course, Scotland.

O’Driscoll’s advice to anyone thinking of moving to Canada is to research beforehand. “Lisa being Canadian made things easier for me, but you don’t have to marry a Canadian to get in! The fact that I work in a high-demand area like tech made the process easier. Nova Scotians are friendly and genuine, but it can be a surprise to find that it only extends so far. Many natives stay in a tight circle. I would say the same is true if you were moving to Cork as a foreigner.”

Unlike, say, Toronto, there isn’t a large Irish expat group in Halifax, but O’Driscoll has managed to extend himself and his love of Irish music by regularly playing fiddle in pub sessions.

“I think anyone who comes out here with a willingness to work will do fine,” he says. “ There’ll be many opportunities all over Canada for Irish people, particularly given the current anti-immigration trend in Trump’s America.”

O’Driscoll says he has always been on the move. “I suppose I was the first generation lucky enough to be able to leave Ireland and come back. Not once but twice. I know the history of Irish leaving, but I feel it is different now, with Skype and relatively cheap air travel.”

As a side project, he is writing a novel around of the life of Francis O’Neill, who left west Cork as a young man to travel the world and eventually become chief of police at the turn of the last century Chicago. O’Neill never lost his love of Ireland and particularly the music, which he arguably saved by collecting and publishing old tunes in his spare time.

As O’Driscoll says, “He’s a wonderful example to follow for those of us who left the place but still keep Ireland in our hearts.”