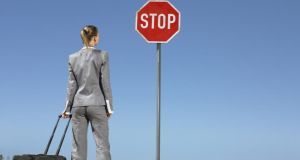 Although women made up only 12 per cent of chief executives, Grant Thornton reported they were better represented in senior support roles.

Young women starting a career now are likely to think their prospects for success in business have never looked so good – certainly better than their mothers’ were. In many G20 countries, their educational attainment is higher than that of their male peers, and the pay gap in many countries is shrinking.

Under pressure from activists and some government ministers, and with growing evidence that diversity at the top helps the bottom line, companies have stepped up their efforts to hire, retain and promote women.

Two recent studies of top positions around the world suggest these efforts are slowly starting to bear fruit.

A survey by Grant Thornton, the professional services firm, of 5,500 businesses in 36 economies found that the proportion of women in senior management had reached an all-time high of 25 per cent, up one percentage point from 2016, and up six percentage points since the survey began in 2004. A separate study by headhunter Egon Zehnder, which focused on 44 countries, reported that women made up 19 per cent of corporate board members in 2016, including non-executive directors, up from 14 per cent four years before.

But the gains are not evenly spread. The Grant Thornton survey concluded that the share of businesses with no senior women at all has risen, to 34 per cent; Egon Zehnder found that companies in 15 countries had gone backwards in terms of gender diversity on boards.

These data points suggest some companies are making considerable progress, while others are struggling to attract and to retain a diverse workforce.

We asked experts in recruitment and management, as well as women who have navigated their way into senior corporate roles, what companies can do to improve gender diversity throughout their workforces. Here are three positive suggestions and one pitfall to avoid.

1: Set specific public goals for representation of women and regularly measure progress toward them.

Karoline Vinsrygg, who leads Egon Zehnder’s global diversity council, points to the contrasting recent history of women on boards in the United States and western Europe to argue that officially-sanctioned goals are necessary to boost the ranks of senior women.

The Egon Zehnder study found that in western Europe, where a number of countries have adopted official quotas or targets, the share of board seats held by women has grown from 8 per cent in 2004 to 26 per cent last year. However, in the US, where the government and most companies have shied away from specifying numerical targets, the figures for women on boards have stagnated at about 20 per cent for the past four years.

“I believe in targets. It’s brave. By putting a number out there, you measure it and for the whole organisation, it shows that it matters,” Ms Vinsrygg says. “We need a revolution here, instead of simply hoping that things will get better.”

2: Start from the bottom and lead from the top.

Francesca Lagerberg, who leads the tax practice at Grant Thornton, argues that efforts to improve gender diversity must start with recruitment of entry-level workers, whether trainee bankers, junior accountants or apprentice technicians. The only way to drive the message home is through “real engagement at the C-suite level – people talking about it and saying it is important”.

Techniques such as removing gender and racial identifiers from CVs and requiring diverse slates of candidates for jobs can help improve a company’s intake and may do more for broader gender diversity in the organisation than recruiting a few female non-executive directors to the board, analysts say.

“You want to hire senior people who can be role models but you really need to invest long term in your employees,” agrees Ms Vinsrygg. “It takes 30 years to get [to] a chief executive from graduation and every year the woman is making choices, her bosses are making choices and the people around her are making choices.”

“Unconscious bias often causes a big drop-off of talent in the middle of women’s careers because some employers wrongly assume you are not committed if you want to take your foot off the accelerator for a while,” says Kathryn Britten. She took six years out to look after her small children, but is now a partner at AlixPartners, the global business advisers.

Ms Britten would like employers to help employees match their evolving goals with the needs of the business. “When employees are truly fulfilled in their daily lives they will feel successful, which in turn drives commitment to the employer, loyalty and longevity.”

Initiatives to help employees stay at work, or at least in touch, when they are facing heavy personal demands can also pay off over the long term, as they are more likely later to ramp up their commitment to work. Such efforts also benefit men with outside commitments, but are likely to have a disproportionately positive effect on women.

Recruiters say businesses also need to find ways to accommodate employees who want to work later in life, having scaled back in mid-career. “One of the things women need is help to plan their careers and flexibility,” says Shirley Soskin, founder and managing partner of Silverhawk Partners, a search and consultancy firm. “The senior women who are more than 50 years old are in danger of being written off.”

4: Beware of taking the “easy” route. Many businesses are opting to write mission statements that affirm their support for diversity and to put their staff through “implicit bias training”, which highlights how people make racist and sexist assumptions about others. Both steps are well-intentioned but can be counterproductive if not backed by deeper changes, warns Sarah Kaplan, who runs the Institute for Gender and the Economy at the University of Toronto’s Rotman business school.

“Implicit bias training with nothing else can have a huge backfire because it makes people feel bad about themselves but doesn’t give them anything positive to do,” she says.

Similarly, adopting a diversity statement without, in fact, making changes to address bias in hiring and promotion processes can end up disadvantaging female and minority applicants who are drawn to the company by the positive statement.

“They attract applicants who think: ‘Wow, this is a diverse organisation, I don’t have to be anything other than who I am’,” says Prof Kaplan, who also teaches strategic management. “Diversity statements can do incredible damage if you don’t back them up.”

Prof Kaplan suggests companies can benefit, however, if they accompany such moves with clear goals on hiring and promotion, and holding managers accountable for progress. For example, a hiring manager’s bonus could be contingent on meeting particular quotas, Prof Kaplan says: “Real accountability with real consequences.” – (Copyright The Financial Times Limited 2017.) Additional reporting by Leyla Boulton