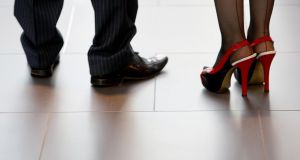 A PwC report found women who had recently changed employers said a lack of opportunities for career progression was the top reason they left their former employer (35 per cent). Photograph: Dave Thompson

Forty per cent of Irish women feel their employers are biased in favour of men when it comes to recruitment. And more than one in 10 Irish women have personally experienced gender discrimination when applying or interviewing for a job, a new survey has found.

According to a new report on gender diversity from PwC, which polled nearly 5,000 professionals in 70 countries including Ireland, opportunities for career progression are among the top three most attractive employer traits for both women and men. The report also found that women who had recently changed employers said a lack of opportunities for career progression was the top reason they left their former employer (35 per cent).

Aoife Flood, author of the report and a senior manager with PwC in Dublin, said companies need to make sure they are meeting the needs of the modern workforce.

“Women today are looking for much more from their careers than previous generations – and organisations need to keep up if they are to secure the talent they need to grow their business,” she said.

The survey also highlights how companies still have a lot of work to do to achieve gender-inclusive recruitment.

Thirty per cent of women globally feel employers are too biased in favour of men when it comes to attracting talent, rising to 40 per cent of women in Ireland. And one-fifth (21 per cent) of women, or 13 per cent of those females based in Ireland, said they had personally experienced gender discrimination when applying or interviewing for a job. In addition, women in Ireland say that concerns over the cost and impact of maternity leave is the top barrier (41 per cent) to increased levels of female experienced hires.

Organisations are using innovative programmes to attract key female talent, the survey notes, pointing to returnship programmes as a bridge for professionals to return to work after an extended career break.

One such company based in Ireland offering a “returnship conference” is Bank of America Merrill Lynch, which is inviting people who have been out of work for 12 months or longer – for example, stay-at-home parents or carers, or someone who has chosen to take a career break – to apply to attend a two-day conference which will be held in Dublin in May.

The bank is looking to attract individuals from a range of industry backgrounds, including professional and financial services and technology organisations, to attend the conference and ultimately fill positions in its Dublin-based technology and operations team.