Why you’re never too old to become your own boss 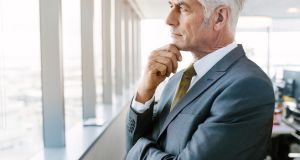 Older entrepreneurs may not have the raw energy of youth, but they can often work smarter because of their life and work experience. Photograph: iStock

John O’Callaghan started his first business in catering equipment distribution in his 50s. Twentysomething years later, he is on the brink of launching another. He has “always been open to new opportunities”, and it was this pioneering spirit that prompted him to take part in a recent New Frontiers start-up programme at DIT Hothouse, where his fellow entrepreneurs were all considerably younger.

“Age didn’t come into it,” he says. “In fact, if I made a point, people tended to listen because I have been in business for a long time and they assumed I knew what I was talking about. From my point of view, mixing with younger people was very enjoyable, and you get carried along by their vision and energy. I can’t speak highly enough of the New Frontiers programme, and I wish there had been something like this around when I was first starting out. It provides so much support and relevant information that you can put to good use from the day you get it.”

O’Callaghan’s company is called Airopol and his new business is an Irish-made cutlery polisher. He sees big opportunities for the machine in the post-Brexit UK.

“The catering trade there is worried about whether they will still have enough staff after Brexit, so a machine that removes the need for labour-intensive hand polishing is going to be of considerable interest,” he says.

Older entrepreneurs may not have the raw energy of youth, but they can often work smarter because of their life and work experience. They usually have an existing network of contacts and are often, although not always, more financially secure. They have more experience of managing their time and juggling the competing demands of their personal and business lives.

They are also good at maintaining their focus and, perhaps most important of all, have learned to cope with setbacks and to manage the rough with the smooth.

Fergal Brehony set up Performance Metrics in 2012 following a long career as a senior manager in the multinational pharmaceuticals industry. One of the reasons he took the plunge was to take control of his future. His business is now on the brink of hitting its sweet spot, but he is candid about the challenges the past five years have involved.

“You go through hell at times, but my advice is to keep going if you know you have a great product and can see the value radiating from it. However, convincing people of this whilst persistently sticking with your values can be difficult if the idea is ahead of the curve,” he says. “You need self-belief, total focus and relentless persistence.

“You also need good support at home, as setting up always takes way longer than expected. A good sense of humour and a lot of resilience go a long way too.

“After long years of frustration with subjective paper-based performance reviews, I started my business because I believed a more objective quantitative system was required,” Brehony adds. “Our aim is to enable employees and managers to have more productive values-based conversations around performance. The challenge has been around getting the buy-in. We have had every possible challenge thrown at us but it has only made us stronger.”

Performance Metrics has recently been approved by Enterprise Ireland for high performance start-up funding and has appointed a distributor in South Africa.

“Our perseverance is about to pay off as the financial services industry, led by the Central Bank, is developing its culture to put the consumer centre stage, and our products – 1872 Perform+ and 1872 Engage+ – are perfectly suited to assuring that the values and behaviours that go to the heart of how an organisation behaves are embedded in every individual, team and board in a company,” Brehony says.

Brendan Crossey was 49 when he set up Healthcare Analytics in 2016 following a career up to vice-president level in a multinational. He has previous experience of the start-up world but this is his first solo flight.

“It’s a lot scarier when you’re in the driving seat, but it’s also exhilarating,” he says. “Our business is in data analytics, and we are using it to create accelerated diagnosis for dementia patients. We are currently moving into the pilot testing phase and will launch in early 2018.

“Getting funding for the venture turned out to be a more fragmented process than I had anticipated. I found investors more risk-averse than I had expected and have ended up going mainly with grants and State aid.”

Crossey was a participant in the 2017 Isax Ingenuity accelerator programme (for older entrepreneurs) run by the DCU Ryan Academy. “The programme was really helpful because it challenges you and your idea,” he says.

“I went in with Plan A and came out with Plan B, which was 10 times better and stronger than my original concept. Starting a business means being prepared to get out of your comfort zone and there is a huge learning curve involved but I’ve found that very positive. I believe you can start a business at any age provided the idea stands up and you have the tenacity to stick with it.”