GoDaddy built its business on sexist ads but then changed tack 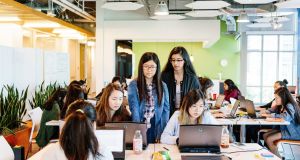 A few years after Blake Irving became chief executive of the internet company GoDaddy, he spoke at a conference where the jeers started almost immediately. Attendees were particularly offended by GoDaddy’s history of sexist television commercials, which featured women in wet bikinis and innuendos so graphic some stations had refused the ads.

But when Irving tried to explain that those advertisements, created by his predecessor, had been discontinued, and that he had been hired, in part, to change the firm’s culture, he was mocked.

“Every time Blake quotes Sheryl Sandberg or calls himself a feminist, throw something at his head,” one person shouted. Which is why it was surprising when Irving appeared as a keynote speaker a year later, in 2015, at the Grace Hopper Celebration of Women in Computing ? and received a standing ovation after detailing GoDaddy’s efforts to become one of the most inclusive companies in tech.

By then, GoDaddy had been recognised as being among the nation’s top workplaces for women in tech. The company’s policies on equal pay, its methods for recruiting a diverse workforce and its approach to promoting women and minorities had been lauded inside business schools and imitated at other firms.

Today, as Silicon Valley sexism again draws attention, it’s worth studying those shifts at GoDaddy. There’s a regular procession of headlines about sexual harassment scandals at venture capital firms and large tech companies. But learning to address this problem requires studying where things have gotten better, as well. And GoDaddy has become, surprisingly, a lodestar among gender equity advocates ? an example of how even regressive cultures can change.

So what did GoDaddy do right? The answer is more complicated than just stamping out overt sexism

So what did GoDaddy do right? The answer is more complicated than just stamping out overt sexism. GoDaddy also focused on attacking the small, subtle biases that can influence everything from how executives evaluate employees to how they set salaries. “The most important thing we did was normalise acknowledging that everyone has biases, whether they recognise them or not,” said Debra Weissman, a senior vice president at the company. “We had to make it OK for people to say, ‘I think I’m being unintentionally unfair.’”

Though GoDaddy still has work to do, the company is “evidence that things can change,” said Lori Mackenzie, executive director of the Clayman Institute for Gender Research at Stanford, which has worked with the firm. “Oftentimes, what keeps companies from shifting is believing the existing system is already fair. Blake is really committed to undermining that.”

When Irving joined GoDaddy in 2013, the firm was succeeding by selling a commodity – website registration and hosting – through outrageous, scandalous ads, such as a 2005 Super Bowl commercial where a woman’s top kept coming undone while observers discussed her plastic surgery. Those ads were deliberately designed to attract attention through controversy. Today, GoDaddy is worth more than $7 billion.

The offensive advertising, however, was demoralising to GoDaddy’s staff, employees from that period say, and the salaciousness, at times, spilled into the workplace. Staff members describe a hard-charging culture where people drank in the office and participated in and gossiped about interoffice affairs. There was a sexual harassment lawsuit in 2009, later dismissed, and websites like NoDaddy.com, where employees described misbehaviour.

Upon becoming chief executive, Irving immediately decreed that GoDaddy would no longer run sexist ads, and reiterated the company’s commitment to combating workplace discrimination. In part, this was good business: Many of the nation’s small-business owners – the customers GoDaddy hoped to attract – are female. Irving, who had previously been a high-ranking executive at Microsoft and Yahoo, also felt GoDaddy was failing to attract talented engineers and executives – including women and minorities – who were alienated by the firm’s image.

But to genuinely transform GoDaddy, executives decided, they needed to convince the company’s 3,500 employees, most of whom thought of themselves as fair and good people, that even a seemingly impartial workplace can be discriminatory. “We needed to become the most inclusive company in tech,” Mr Irving said. “We had to erase the idea that meritocracy is enough.” Some of the problems applicants and workers faced were subtle. For years, for instance, GoDaddy’s job descriptions were needlessly aggressive, saying the company was looking for “rock stars,” “code ninjas,” engineers who could “knock it out of the park” or “wrestle problems to the ground.”

Moreover, when GoDaddy’s human resource department began reviewing how the company analysed leadership capacities, it found that women systematically scored lower because they were more likely to emphasise past team accomplishments and use sentences like “we exceeded our goals.” Men, in contrast, were more likely to use the word “I” and stress individual performance.

“There’s a lot of little things people don’t usually notice,” said Katee Van Horn, GoDaddy’s vice president for engagement and inclusion. “But they add up. They reinforce these biases you might not even realise you have.” GoDaddy began focusing on countering these biases, assessing the company’s hiring, employee evaluations and promotions. In particular, executives scrutinised employee reviews, which evaluated workers using questions similar to those found at many companies: Does this person reply to emails promptly? Have they sought leadership roles? Have they shown initiative?

“We realised a lot of those are invitations for subjectivity,” Ms Van Horn said GoDaddy’s data indicated that women tended to systematically be scored lower than men on communication, in part because they were more likely to be a family’s primary parent, and so were more likely to be off email in the early evening during homework and bedtime hours.

“And the more important question isn’t whether someone responds to email right away,” Ms Van Horn said. “It’s what they say, whether their responses have impact. We shouldn’t be judging people based on how fast they communicate. We should be looking at whether they achieved the goals set for them.”

Women also, on average, scored lower than men on evaluations of taking initiative, because most of GoDaddy’s midlevel managers were men.

Women also, on average, scored lower than men on evaluations of taking initiative, because most of GoDaddy’s midlevel managers were men, and the culture was top-down, which made it harder for female employees to participate in and get attention for prominent projects, employees say.

GoDaddy overhauled its employee evaluation forms, replacing open-ended questions with specific criteria that evaluated employees’ impact, rather than their character. Instead of asking if someone is good at communicating, the new evaluation form asked managers to document instances when an employee shared knowledge with a colleague, or collaborated with a team.

“You can’t change a place just by hiring more women,” said Ms Weissman, the senior vice president, who oversees a technical staff. “You have to create a safe space to talk about the assumptions all of us have. You have to work against the biases.”

Today, almost a quarter of GoDaddy’s employees are women, including 21 percent of its technical staff. Half the new engineers hired last year were women, and women make up 26 percent of senior leadership. Female technologists, on average, earn slightly more than their male counterparts.

There are critics, though. One former high-ranking woman, who requested anonymity because she worried that speaking critically would harm her reputation, said she found GoDaddy’s commitment to change uneven. Departments tended to take inequality seriously when top executives were paying attention, she said. But that focus lessened when scrutiny declined.

And convincing the world is going to take time, as well. When Mr Irving gave the keynote at the Grace Hopper Celebration of Women in Computing, he said, he was terrified. He began by showing the audience some of the images GoDaddy had used in commercials.

From the stage, he saw hundreds of angry, sceptical faces. Then he walked through everything GoDaddy was doing. He promised that the company’s dedication to eradicating the gender gap would not end. He pledged to listen to any suggestion, and to pressure other firms to steal GoDaddy’s best ideas.

“It was a big moment,” said Elizabeth Ames, a senior executive at the Anita Borg Institute, an influential Silicon Valley group advocating for women in technology. “Everyone was sceptical of GoDaddy, the same way they’re sceptical about companies like Uber today. But GoDaddy was really committed to it, and it’s working.”