Construction workers in line for 10% rise in minimum pay 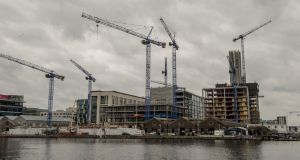 Minimum hourly rates for up to 50,000 workers across the construction industry could rise by close to 10 per cent.

A number of highly placed sources believe a pay increase of this order will form part of a new Labour Court order for the construction sector.

A spokesman for the Department of Jobs, Enterprise and Innovation said on Friday that the Labour Court “has concluded its deliberations on an application for a sectoral employment order for the construction industry and submitted a report with recommendations to An Tánaiste Frances Fitzgerald”.

The report is a key part of the process to strike a new industry-wide sectoral employment order that would set a minimum floor on pay across the construction industry.

The construction sector will be the first to have such an order put in place. It replaces the old registered employment agreement (REA) structure, which was struck down as unconstitutional by the Supreme Court in 2013.

Unions representing about 50,000 construction workers had sought increases of 10 per cent over the old REA rates under the new agreements.

Their claim includes restoration of a 7.5 per cent pay cut in the REA rates which was put in place in 2011 after the economic crash. They also sought the first of three annual 2.5 per cent pay increases.

However, employers warned that about 8,000 potential jobs could be jeopardised by such a move.

Under the old REA rates, craft workers in the construction sector received €17.21 per hour. The agreement laid down a minimum rate of €16.69 per hour for a skilled group of workers, including crane operators, qualified scaffolders steel fixers and machine operatives. Three lower-skilled groups of workers had minimum pay rates of €15.66, €15.14 and €13.77 an hour.

The report from the Labour Court comes against the backdrop of ongoing industrial action by crane operators.

A planned escalation of that dispute, which could have led to widespread disruption on construction sites from Friday, was deferred by a week to facilitate talks at the Workplace Relations Commission, which are expected to take place early next week.