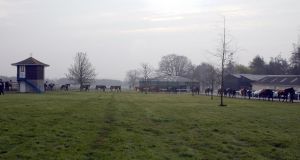 Horses being exercised at Ballydoyle: an argument is being made over the classification of the operation as agriculture or industry.

Exercise riders and grooms at the country’s leading racing stable worked for up to 19 hours a day, the Labour Court heard on Wednesday.

Ballydoyle Racing Stables, run by leading trainer, Aidan O’Brien, is appealing a Workplace Relations Commission (WRC) notice, requiring it to comply with legislation governing working hours, on the basis that training racehorses is exempt from the rules because it is classed as agriculture.

The commission’s lawyer, Rosemary Healy Rae, told the Labour Court that some Ballydoyle employees had “worked for 19 hours out of 24” while others had worked for 15-17 hours.

The WRC took details of the hours worked by some staff during a pre-announced inspection of Ballydoyle last year and issued the compliance notice in relation to a small number of employees. Failure to comply could lead to prosecution.

However, Ballydoyle’s counsel, Paul Gallagher, pointed out that staff at the racing stables were seen as a very important part of the operation.

“These employees are extremely well-looked after, they have many benefits going beyond the normal, including housing and healthcare,” he said.

Vet and racehorse breeder Des Leadon, one of the witnesses called by Ballydoyle, told the court that there was “no way” that stable staff would work with the same intensity for 19 hours a day, as there are breaks and periods of downtime.

The yard’s horses are fed and exercised at set times in the mornings and afternoons, while staff finish their duties earlier than most workers, Mr Leadon explained.

The WRC argues that training and caring for racehorses does not constitute agriculture as it is defined in industrial relations law, and so is not exempt from the Organisation of Working Time Act 1998, the legislation under which the compliance notice was issued.

Mr Gallagher argued that the definition was incorrect and told the court that the WRC had in fact treated Ballydoyle’s activities as agriculture until February 2016, when it changed this view without any explanation.

He also rejected an argument made by the commission that even if Ballydoyle was entitled to the exemption, it would first have to give staff compensatory rest breaks to qualify.

It also maintains that the “continuity of care” given the horses by grooms and work riders, and the animal husbandry involved in their development, qualifies their work for the exemption.

Both Mr Leadon and Prof Alex Evans, of UCD’s school of agriculture and food science, said the continuity of care provided by grooms and riders was critical to the horses’ development.

“I am convinced that it’s an agricultural activity primarily because of the animal husbandry involved in caring for these horses,” Prof Evans said.

However, responding to Ms Healy Rae, he acknowledged he was not discussing any legal definition of agriculture.