Pilita Clark: Why can’t we all work a five-hour day?

An Australian company has made the switch to shorter hours. Business is booming 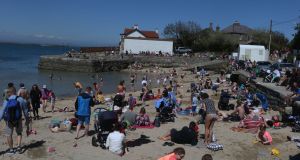 With a five-hour day, we could hit the beach in the afternoons. Photograph: Stephen Collins

The other day I heard a story about something so odd yet compelling that I have not been able to stop thinking about it.

It happened in the Australian city of Hobart where the boss of a financial advice firm started working part-time after his wife – a new mother – began treatment for cancer.

Jonathan Elliot found he could get as much work done in five hours as he had in his previous eight, so he had a thought: why not see if everyone else in the company could do the same?

At the start of last year, the 30-odd staff at his firm, Collins SBA, began a trial of a five-hour day, with no cut in their pay. They had to start between 8am and 9am and get their work done by 1pm or 2pm. After that, most were free to hit the golf course, play with their children or whatever else they felt like. The reception desk stayed open all day and urgent client needs were met.

I like the five-hour day idea for so many reasons it is hard to know where to start. First, it offers an end to some of the dreariest bits of office life, like the long or pointless meeting

Despite fears the move could blow up the business, it has worked so well to date that there are no plans to end it, says Claudia Parsons, the firm’s operations director.

“It’s been life-changing,” she told me last week. Sick days have plunged. Talented recruits have been hired. Some advisers have done record levels of new business. Clients did not mind waiting a few hours to see an adviser. The firm’s bottom line seems unaffected.

This is just one, smallish firm full of accountants and financial planners. Yet I like the five-hour day idea for so many reasons it is hard to know where to start. First, it offers an end to some of the dreariest bits of office life, like the long or pointless meeting.

Hour-long meetings have been ditched at Collins SBA. There is now a 10-minute weekly office-wide huddle, where everyone stands, and smaller, brief get-togethers if needed.

A five-hour day should also end another office idiocy: hanging around until 5pm when you have done all your work, or because the boss is still there. If people at Collins SBA are still at their desks at 5pm, Ms Parsons says it is “no longer considered admirable”.

Another plus of the five-hour day is that it recognises a hidden truth of working life: some people get more done in three hours than others do in 10, yet are never rewarded for it.

I am thinking here of the many working parents I know (mostly women) who barrel through their work, scoff lunch at their desk and sneak off guiltily as soon as they can to collect their children.

I suspect a lot of men would see more of their family if they could and Ms Parsons says many have begun to do so since the five-hour day began.

Another plus of the five-hour day is that it recognises a hidden truth of working life: some people get more done in three hours than others do in 10

Yet you do not have to be a parent to see the benefits of a shrunken work day. You only need to be among the one-in-eight people in OECD countries who work 50 hours or more each week.

The end of leisurely lunches and the need to work efficiently did not suit everyone at Collins SBA. A couple of people left. Others worried about the dearth of office chat and collaboration. The firm now has afternoon staff outings every two months.

Obviously, a five-hour day would not work everywhere. Any firm billing by the hour would find it appalling (though I bet their clients would not). It would be hopeless for most people in my trade. The world makes news all day and journalists have to be ready to report it. Even early proponents of the five-hour day have made adjustments.

Mr Elliot was influenced by a book by a US entrepreneur, Stephan Aarstol, who introduced five-hour days at his San Diego paddle board company, Tower, in 2015.

He offered his employees the same pay and a 5 per cent profit share but warned that anyone who couldn’t get with the five-hour programme would have to leave, and several did. “You’re putting people under the spotlight,” he tells me. “It became very obvious which people were getting nothing done.”

He has now decided to limit the five-hour day to summer months and go back to eight hours the rest of the year. “Our experiment is still going,” he says.

I wish him well. The idea of the eight-hour working day is more than a century old and there is something strange about our attachment to it. A five-hour day may not be the answer for all. But I think it could work in many more places than a lot of us imagine.