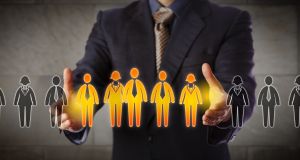 Figures released by the Central Statistics Office (CSO) show the number of people employed in the Republic’s economy has grown to a record 2.31 million.

Record levels of employment are putting upward pressure on wages and salaries, according to a new study by the Central Bank and recruitment website Indeed.

The research, based on data from over 50,000 online job postings and searches, indicated employers here were finding it most difficult to fill high-skilled roles in healthcare, finance and engineering.

It also found that advertised salaries were “significantly higher” in jobs that receive fewer clicks, as this indicated that the supply of potential workers is low.

Indeed said its collaboration with the Central Bank had resulted in a new measure of labour market tightness through analysing the number of clicks on a job posting.

Figures released by the Central Statistics Office (CSO) show the Republic’s employment rate increased by 3.7 per cent in the first quarter of 2019, bringing the number of people employed in the economy to a record 2.31 million.

It suggested Dublin had 60 per cent of job postings, followed by Cork at 10 per cent and Galway at 8 per ent.

It also noted that there is a greater concentration of workers in sectors with higher turnover in the capital.