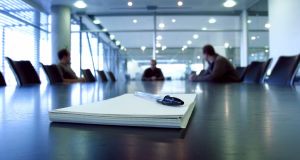 Serving on a board now comes with clear responsibilities and penalties for failing to meet them. Photograph: René Mansi/ISPC

At one time a non-executive directorship was seen as a handy sinecure with which to end one’s career. However, the progressive tightening of corporate governance rules has put paid to that. Serving on a board now comes with clear responsibilities and penalties for failing to meet them.

What’s expected of a non-executive director (NED) has changed and the selection process, especially for an NED within a large corporate or financial institution, is every bit as arduous as applying for any senior job.

A recently retired financial services sector executive being considered for an NED went through five interviews and estimates the preparation time for the final interview alone at three weeks solid. There were background checks including career and financial vetting, to-ing and fro-ing around the information required for due diligence and consultations with lawyers to ensure that the demands of the regulatory environment were fully understood. All in all, the process took nine months.

Thora Mackey is chief operating officer at the Institute of Directors in Ireland (IoD) and head of the Boardroom Centre, which sources non-executive directors (including chairpersons) for its clients. “The three sectors where the scrutiny has tightened considerably are regulated financial services entities, State boards and charities,” she says.

“The focus is very much on good governance and how an NED can add value and fill a skills gap on the board. Take charities as an example. In the past, board appointments were often related to fundraising objectives. Now, the emphasis is much more on governance and getting the right mix of experience and diversity.

“Becoming an NED is onerous and people need to be sure it’s a right fit for them. Some NEDs have a portfolio but it’s not like the old days where people sat on maybe 20 boards. The commitment now required is too great.”

In the past being asked to join a board was often down to who you knew and, while that is changing, Mackey says there is a long way to go to dismantle the old-boys network completely.

When it comes to securing a board seat, be careful what you wish for. Boards can be highly political places where ideologies and personalities clash. Stories of boardroom bust ups are legion.

John Tusa, veteran journalist and former presenter of BBC’s Newsnight, has drawn on some of the tussles he witnessed first hand to illustrate this in his new book, On Board – An Insider’s Guide to Surviving Life in the Boardroom, published this month by Bloomsbury Business. Having spent 30 years in the boardroom Tusa observes wryly: “The high points are very high, the low points properly chastening.”

Tusa looks at how life on any kind of oversight grouping, from a PLC board to a parents’ council, is similar and prone to division and personal squabbles. Tusa’s board experience is international and primarily in broadcasting and the arts, but he says the same rules apply to cultural and corporate boards.

“Good governance works on the same principles in the business and the NFP [not-for-profit] sectors. It is not different because the financial environment is different,” he says.

Adding that the non-executive board member plays a critical part in the success of any organisation, he notes, however: “They do not run it; they watch over it, they supervise it. The ultimate responsibility for an organisation is theirs but they should not interfere in the way it is managed. This is the central paradox of the activity of ‘governance’ . . . A well-functioning board will enhance, or even help transform an organisation, while a badly-run board can undermine the institution for which it is responsible.”

Tusa has taken the role of chairman on occasion and says that doing it well is a lot harder than it looks. He also makes the point that, while every board he has sat on was made up of bright people, almost every one of them made at least one significant mistake.

In On Board he describes some of these mistakes in a series of case studies and offers “reflections” at the end of each which combine sage observation with suggestions for avoiding some of the classic errors he has seen made along the way. For example, boards overly fixated on finance. “Governance is more than that: watch the mission,” he says.

Tusa is a former managing director of the BBC World Service and makes no secret of the fact that the worst chairman he ever served under was Marmaduke Hussey, who held the job at the corporation from 1986 until 1996.

“He was ignorant and arrogant in equal measure: arrogant about his supposed social position and abilities, ignorant of the complexities and purposes of a great broadcasting organisation. He broke every rule in the governance rulebook,” Tusa says.

“Good governance depends on good behaviour. No one has ever found a way of defining how individuals should behave on a board. Too many behave badly.”