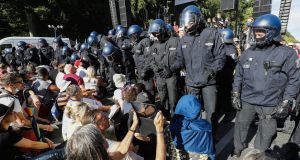 Demonstrators sit in front of police during a protest against coronavirus pandemic regulations in Berlin recently. Photograph: EPA/FELIPE TRUEBA

“Competition for resources, kidnap and ransom, cannibalism, revenge killing, and all-out war”: the pandemic has provoked some outrageous, atavistic behaviour, but we have at least resisted, so far, the temptation to eat each other.

As they prepare for a possible second wave of coronavirus, though, leaders should study dysfunctional group dynamics, suggests Markus Hallgren of Umea University, if only to prepare against any future slide into disorder.

Whereas plenty has been written about “zombie jobs” and “zombie companies”, he and co-author David Buchanan of Cranfield University examined how we might respond to zombies themselves.

“A zombie apocalypse . . . is a good proxy for ‘dark side’ behaviour in general, and other extreme, catastrophic, doomsday scenarios in particular,” they write in their recent paper for the Academy of Management journal Perspectives.

The study looks at how survivors handle a fictional doomsday scenario in the long-running US television series . In sum, poorly: hence that opening list of unpleasant and gory outcomes, as mistrust and rivalry run rife after a mysterious zombie virus strikes the human race.

It is an offbeat topic for scholarship. But fiction – science fiction in particular – has a strong pedigree as a way of encouraging fresh thinking in real life. Imagining the unimaginable is part of the scenario planning process that many companies have accelerated as they try to plot a path through the post-pandemic uncertainty.

Writing for Medium’s OneZero blog about how the military is commissioning sci-fi consultants to speculate about the future of warfare, Andrew Liptak refers to an early example, the incongruously titled novella , written by a British army colonel in 1871 to warn about Germany’s battlefield advances. “Science fiction is an ideal framing device for military strategists – not only as a way to envision potential futures, but also as a method of information delivery,” Mr Liptak writes.

The living dead have a tendency to blunder into strategy and training sessions, too. One Californian hospital organised a zombie apocalypse exercise to test its response to infectious diseases or mass-casualty events. The US Centers for Disease Control and Prevention – now at the core of the US response to the pandemic – have used zombie apocalypse preparedness as a way to explain to the public how to plan for real emergencies.

Covid-19 is not a drill, however. So while the Academy of Management study was conceived, written and peer-reviewed long before the virus emerged, it explores tensions between rival groups of humans that are all too familiar. “Extreme settings act as ‘pressure cookers’, heightening the importance of routine issues such as teamwork,” the researchers write.

A postscript to the study draws attention to pre-lockdown hoarding, supermarket squabbles over scarce toilet rolls, soaring weapons sales in the US, and violent incidents when access to shops was restricted. If humans are showing a little more compassion and tolerance now, Prof Hällgren told me, it is probably because we are growing used to pandemic conditions.

Under the surface, though, the attitude prevails that “if I have to choose between someone else’s family and my own family, I’m going to put my own family first”.

In The Walking Dead, rather than humans rallying against the common threat and choosing co-operation and collaboration in order to survive, they resort to conflict. “Mistrust is a life insurance policy,” write the researchers.

Some of the behaviour and rhetoric in the unfolding spat between the UK and Spain over the former’s quarantine restrictions echoes the selfishness and suspicions of the feuding groups of survivors in post-apocalyptic fiction.

Similarly, the cut-throat race between nations to secure stocks of protective equipment and develop vaccines for their own citizens could turn nasty. Mask-enforcers and mask-refuseniks have already come to blows.

Prof Hallgren has also studied how police units and groups of mountaineers respond when they are put in the “pressure cooker”. He warns tensions can boil up “not just between teams, but within teams”.

That is an ill omen for how, say, hybrid groups of in-office and remote-working colleagues could behave in the anxious months ahead if poorly managed.

The good news is that the crisis forged solidarity between clusters of colleagues, even if they were isolated from each other. Reinforcing those temporary bonds and communicating the revised mission are priorities for team leaders in the months ahead.

As The Walking Dead underlines, even humans who can recognise a zombie are doomed if they fail to prepare for their next encounter with one. – Copyright The Financial Times Limited 2020