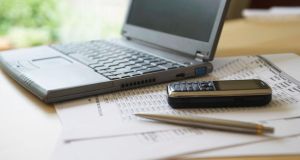 Employee analytics firm Peakon found two of the top five words employees used at the height of the pandemic in March and April were “hours” and “pressure”. Photograph: Chemistry

Last week brought a bleak revelation about working from home. It came as I was standing in my bedroom, trying to decide what to wear to something I had not been to for nearly five months: a work lunch.

As I fished around for an outfit, then pored over Google Maps to see how to get to where I was going, I realised I was feeling idiotically anxious.

I say idiotic because it eventually dawned that what I was worrying about was the amount of time I was about to spend away from the laptop on my kitchen table.

It would take close to two hours to get dressed; reach the appointed meeting spot, have lunch and get home again.

My pre-Covid self would not have thought twice about this because, back then, the working day was full of interruption. The commute to work. The tromp around the office to a meeting room. The need to tell a colleague what had been watched on TV the night before.

But working at home since March, I realised, has made it feel normal to spend hour after eye-aching hour in front of a screen.

This explains one of the baffling things about the vast work from home experiment millions of us are living through.

The absence of a commute and other evils has made life so much easier that surveys repeatedly show most of us want to keep working at least one or two days at home once the pandemic eases. Yet the longer remote working goes on, the more it is starting to pall.

A lot of jobs take longer when the person you need to reach urgently is out walking the dog. It is harder to find out why emails go unanswered when you cannot stalk over to the non-responder’s desk. No wonder research suggests the working week has stretched by as much as four more hours.

Also, some home offices are abysmal.

A sobering 71 per cent of workers at home have reported a new or worsening ailment since the outbreak, a global study by the Lenovo tech group showed last month. Fatigue, insomnia and headaches were common from Brazil to Britain, along with backache and eye problems.

At the same time, most people said they had been more productive, a finding that makes sense at a time of soaring unemployment and job insecurity.

But being highly productive is no picnic, according to Peakon, an employee analytics firm that companies (including the FT) use to measure how their staff feel about their work.

When it analysed 25,000 comments people had made in its surveys, it found two of the top five words employees used at the height of the pandemic in March and April were “hours” and “pressure”.

As time went on, a large chunk of managers were mentioning their own mental wellbeing and one of the top phrases they used was “utter madness”.

In other words, both managers and the managed are starting to feel the strain and for many there is no end in sight.

Google last week became the first big US company to say it would keep staff at home until July next year. I doubt it will be the last.

So what to do? I have discussed this question with executives at a lot of companies and one point each has made is that it is more important than ever for workers to have regular one-on-one conversations with managers.

It exposes problems before they become disasters. It quashes needless paranoia and, vitally, it helps to make a company’s priorities clear.

It can also be tough to do. Managers are more pressured and already having more meetings to keep far-flung teams in touch. But those group sessions are not enough for a parent trying to meet urgent deadlines in between home schooling, or a new recruit with no clue who to ask about a testing task.

Carving out time for these people in particular is, as one senior executive told me the other day, management 101 at a time like this.

Wise bosses have always tried to understand what their workers are going through at home. Everyone needs to follow that lead when home is also work. – Copyright The Financial Times Limited 2020