Men must be on board to help eradicate workplace gender bias 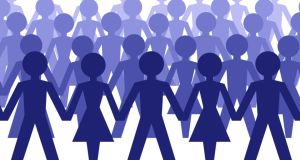 Sisters may be doing it for themselves but should they be fighting alone when it comes to addressing issues surrounding equality and inclusion in the workplace?

Women have generally led the charge towards bringing about a better deal on a wide range of work-related issues, including boardroom diversity, equal pay and better conditions for working parents. Men may not have stood in their way but they haven’t necessarily come out guns a-blazing to help them either.

And while much has been achieved in terms of creating better opportunities for women in the workforce, there’s still something of a lag. Given this, a movement is developing seeking to encourage more men to stand up for their female colleagues to bring about greater change.

Many leading international companies, including Unilever, PricewaterhouseCoopers and Twitter, have come out in favour of initiatives such as the UN-backed gender-equality campaigns HeForShe, while men in leadership roles in these and other organisations are also participating in Men Advocating Real Change (Marc) programmes. This is a community of men committed to achieving gender equality in the workplace by offering a space for them to grapple with sticky subjects such as unconscious bias directly and honestly in a judgment-free atmosphere.

“Barriers that we identified which stopped men’s involvement included apathy or a lack of concern about issues of gender equality. Another was fear; firstly that it’s a zero-sum game and gender equality means a loss of status or privilege for men; fears about making mistakes; and lastly, fears about other men’s disapproval. The good news, however, is that we are seeing men who are willing to be part of the solution but are not always sure where to start and how to go about it,” Ondraschek-Norris added.

While the idea of encouraging men to help women achieve more might be anathema to some, she added there are smart reasons for doing so.

“We know that the concept of allies and advocates is crucial to minority groups. For example, many straight ‘allies’ working alongside the LGBT community helped to form a massive groundswell of support for the recent marriage referendum. Similarly, men by virtue of being the dominant group in the workplace are ‘privileged’ in ways that can disadvantage women but they are also part of the solution, and without their active support women’s advancement will continue to be glacial,” Ondraschek-Norris said.

“Things wouldn’t be working at the same level as in the US but we’re really beginning to see that groundswell happening here in men taking more of an active role in areas such as diversity and inclusion here as well in recent years,” said Kara McGann, senior policy executive at business group Ibec.

“What we’re witnessing is a real sea change and it is a necessary one because if you want to achieve lasting change, then you need both men and women on board. While there might be a bit of cynicism about it in some quarters, the companies pushing ahead are very serious about it and are really looking to make a shift towards making cultural change within their organisation,” she added.

Ondraschek-Norris says that before men can support change, they must first be convinced that the status quo on gender equality is unfair and bad for their companies’ bottom lines.

Limerick-born and raised, Aongus Hegarty, who serves as president of Dell for Europe, the Middle East and Africa (EMEA), isn’t shy about seeing the issue from this angle. Hegarty, who has won plenty of plaudits over the last few years for his proactive work in trying to create an environment in which all employees can thrive, agrees that there’s a business case for being in favour of better opportunities for all.

Having participated in the Marc programme along with other members of his leadership team, he’s convinced that assisting women to go higher up the ladder is good for everyone and this is something he says he learnt first-hand when he first moved into his current role.

“When I started putting the EMEA leadership team together, initially I spent time picking the right people and once selected I stepped back and thought I’d chosen a really strong team that was diverse and with people from a wide range of backgrounds, experience and so on. But there was one glaring problem, which was that there was only one female leader. That started me on a process of trying to understand why there were so few women at senior level and towards trying to amend that.

“I spent some time talking with people internally and attending conferences and so on and came to realise that this wasn’t just about doing the right thing, it was essential for the business. I realised that the more diversity we had in terms of gender, culture, experience, the stronger the team was and the more likely it would be that we’d improve our performance,” said Hegarty.

He believes the results speak for themselves. “We’re now in a situation where a third of our leadership team is female and as we’ve become more diverse and more inclusive. We’re making better decisions. We’re getting fantastic feedback from employee surveys in terms of engagement. Our feedback from customers and loyalty is at an all-time high and our financial results and performance in the marketplace are also at a high so we’ve seen the benefits of encouraging men to become more involved in initiatives across many metrics,” said Hegarty.

“Read the research, become a believer and don’t waver in the face of resistance or challenge if it arises,” he advises.

“This can be a sensitive area as some women will feel they need support and others will feel the opposite; some men may also pick up wrong or unintended signals so it may be hard to navigate.

“I would also encourage men who are interested to talk to women in their own workplace and outside and try to better understand the conscious and subconscious barriers that can exist. Finally, make sure that your senior managers are fully behind any initiative and galvanise some of them as well as other influential managers to work alongside you,’ he added.

Ondraschek-Norris is keen to stress that asking men to do more to encourage diversity and inclusion isn’t just about supporting women. Rather, it’s about rethinking dominant narratives of leadership, corporate culture and the kinds of role models people see in the workplace.

“A fair workplace is one in which individuals are able to rise through the ranks based on their talent and uninhibited by their gender; and when a workplace is free of gender bias, both men and women can gain significant personal benefits,” she said.