Lucy Kellaway: Being bad at maths is not cute – it’s dangerous 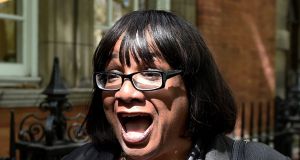 Last week Diane Abbott showed on live radio that she could not do simple division, did not understand place value and was an all-round dunce at maths.

The interviewer did a swift sum in his head and pointed out that would mean £8,000 per copper. Thoroughly humiliated, Abbott started to spew out random numbers with such desperation that by the end she was babbling incoherently about an additional quarter of a million police officers on the streets.

This excruciating exchange was evidence of something troubling: it is perfectly possible to be a member of the British ruling class and be astonishingly rubbish at numbers.

Abbott is in possession of one of the finest educations the country has to offer. She went to a grammar school in northwest London and on to Cambridge university, where she was taught by the historian Simon Schama. Yet to divide £80 million by 10,000 was quite beyond her.

Not big, not clever

I gave a talk last month at the Oxford Literary Festival and asked the 150 amply educated types in the audience to put up their hands if they were useless at maths. About 70 arms shot up. The only thing more depressing than how many of them considered themselves innumerate was that none saw anything wrong with it. Instead, the looks on the faces of these mathematical dunces were of amused self-indulgence, as if being bad at maths was a lovable quirk, like having a weakness for salt-and-vinegar crisps. “You’re a national disgrace,” I told them, whereupon they tittered complacently, confident I was joking.

Had they been scientists and I had asked them if they were hopeless at reading and writing, I doubt a single hand would have gone up. No one thinks it is lovable to be illiterate, yet the British intelligentsia, most of whom have not done a sum since they were 16, consider their failing entirely cute.

It is not cute. It is stupid, shameful and, if you have any position of responsibility at all, it is dangerous. I suspect uselessness at maths among the powerful is more common than we fondly believe. Three years ago Paul Flowers, then chairman of Co-operative Bank, outdid Ms Abbott when he said the bank had £3 billion in assets, but the real number was £47 billion. His innumeracy had gone unheeded for 62 years and might have done so forever had he not screwed things up so royally that he was hauled in front of parliament for questioning.

Most people who do not know the basics of maths tend to get away with it. The same is not true with words. Employers take a dim view of anyone who makes spelling mistakes on a CV, yet they routinely hire people who can hardly count, as they never put the latter skill to the test.

A child once asked Gordon Brown a great question: what is 13 squared? Quick as a flash, Brown said 169

Almost 20 years ago, Gordon Brown, then chancellor of the exchequer, allowed himself to be questioned by a load of kids on television. One of them asked him a great question: what is 13 squared? Quick as a flash, Brown, to the great relief of his advisers, said 169. Back then I wrote a column recommending that all companies routinely ask candidates this most excellent question – and so was delighted when a couple of months ago I met a HR chief of a big company who has been asking just that ever since. The results? He said almost no one knows the answer straight off. But those who quietly work out 13 x 13 in their heads tend to get the job. Those who panic and bluster and “do an Abbott” tend not to.

I have done some jobs that have involved a nodding acquaintance with numbers – in banking and as a nonexecutive director. Yet never has the selection process involved a test of whether I am any better with figures than the shadow home secretary. It is only now that I have been applying for jobs as a trainee maths and economics teacher that I have been tested. It was a bit frightening. And a bit sobering. But it is a start.