Lucy Kellaway: My speech was a tour de force of clangers 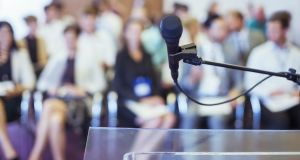 “Two minutes into my speech, and I was aware the laughter was strained – and it became more so as I ploughed on.” Photograph: Getty Images

I took a train to Oxford last Wednesday to give a speech to the benefactors of my old college. I was in excellent spirits. The sun was shining and I was amusing myself reading a blog post by Chip Conley, the entrepreneur, about the wisdom that comes with age. At 56, he likes to see himself less as a carton of milk bearing a sell-by date than a bottle of wine that gets better every year.

As I walked through Oxford, I felt inclined to agree. I too was like an improving bottle of wine. No longer did the honey stone whisper: “You aren’t good enough.” The intensity – both the misery and the odd spurt of joy – I felt as an undergraduate had finally receded. Lady Margaret Hall (LMH), whose façade used to look like a prison to me, has had vast sums spent on it and in the late afternoon sun looked borderline handsome.

I was even looking forward to giving the speech. Nothing could go wrong, the audience was captive and I had written something that I felt balanced comic reminiscence with sincerity, and was edgy enough to keep the audience from nodding off over the port.

Two minutes in, and I was aware the laughter was strained – and it became more so as I ploughed on. Within seconds of my sitting down, two men were jostling at my elbow in protest. One of them, teeth gritted in rage, demanded to know what was going through my head when I had decided to insult everyone. The other simply said: “Just go!” pointing at the door.

In the space of 15 minutes I had got up the noses of assorted former students, benefactors and dons. I had somehow told the men they were dim, the women frumpy, and had taken the name of the absent Stephen Hester, (chief executive at RSA Insurance, and a student in the year below me) in vain. Mine was a tour de force of clangers.

I have made a few people cross over the years, but what was remarkable about this was not the strength of the feeling but that, for once, I was trying to do the reverse. My college changed my life. It taught me how to work, how to think – and how to spot cant and feeble logic.

LMH took me on despite atrocious A-levels and being entirely undeserving, but it is now doing something more worthwhile. It has set up a foundation year for students from poor backgrounds who despite difficult starts in life have performed far better at school than I ever did.

It is not nice to have people shouting in your face, but what shook me more was wondering how on earth, with all my experience, I could have misjudged my speech so badly.

By the end of the night I had worked out that Conley was talking rot. I have nothing in common with a fine old bottle of wine, though if I at that moment had had one to hand, I would have downed the whole thing.

Instead of getting wiser with age, the reverse appears to be happening. The most noticeable change (apart from the ones that I see in the mirror) is that I am not frightened any more.

I used to be scared of failing at work, or of being found out, or of what people thought of me. Being post-fear makes life more comfortable, but also more dangerous, because fear fends off disaster. It discourages you from packing a speech with sarky, teasing asides which, though possibly amusing to you, might be less so to those who are the butt of them.

The incident has taught me something even more uncomfortable – how hard it is to learn from mistakes. I have form on this: I go on hitting the kerb when parking. I go on misspelling “separate”, despite the assiduousness of Google in correcting me.

Doing something badly is painful. And as being in pain is not nice, I am getting good at pain-reduction strategies. Already in my head, I am spinning the story so I come out of it less badly, and I daresay in a day or two I will be blaming the audience for not seeing the funny side.

Which leads me to one thing I have got better at with age – recovering from a setback. A calamity on the scale of last week would once have left me cringing for a couple of years at least.

I have spent the past 24 hours in a state of advanced mortification. But now that I have got this off my chest it may soon be time to pretend none of it ever happened.