In the business world, even when we work for the same company, we often find ourselves at cross-purposes with our colleagues 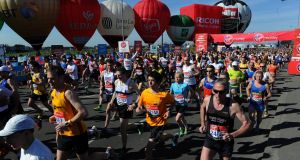 Collaborating in the long run: A general view of the start during the Virgin London Marathon in London. Photograph: Anthony Devlin/PA Wire

A strange thing happens every year during the London Marathon. With approximately 40,000 runners participating in the event, crowd control necessitates that there be three different starting points.

The runners are so competitive that their randomly assigned group is enough to evoke an identity. They essentially become red, blue or green tribes and, when meeting people from a different group, they view them as members of one of the other tribes. Booing simply makes sense.

In the business world, even when we work for the same company, we often find ourselves at cross-purposes with our colleagues.

Even though everyone is on the same team, individuals’ goals and needs might be different. This environment sets the stage for functional units to adopt a mindset that is more “us v them” rather than “us v our competitors”.

Things start to go tribal when these functional groups stop communicating effectively with each other. At this point, you’ll see several red flags:

– Rock throwing: Are teams blaming each other and unjustly criticising their work? This is a pretty clear sign of tribalism.

– “Pushkin did it”: In Russia, when you don’t know who did something, it is common to say “Pushkin did it”. Be on the lookout for cases in which teams don’t understand or admit the reasons behind missed deadlines or commitments.

– Refusal to work together: A situation in which whole departments or organisations refuse to co-operate with one another can become a very expensive form of corporate tribalism.

What can you do?

Here are a few tips that can be useful in overcoming tribalism:

– Manage the psychology: When there are conflicting goals in a competitive environment, you can’t let human nature run on autopilot. Watch out for people demonising one another and over-reacting to situations.

– Reframing: It’s leaders’ responsibility to reframe situations for their followers. Take care in defining the mission or goal your team is going after.

– Break down silos: With widely distributed knowledge and skills, it is imperative to break down information and data silos to be competitive.

– Manage executive egos: Are your senior leaders sending the right message about collaboration? If your senior leadership isn’t displaying the behaviour that is needed then it won’t happen at the organisation’s lower levels. – Copyright Harvard Business Review 2017

Robert Kovach is the director of leader success at Cisco.