‘Covid makes you think differently; I probably wouldn’t have done this unless forced’ 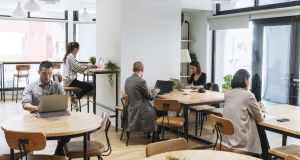 Banks Benitez had great plans for his staff in 2020: a four-day week on full pay. Then the pandemic struck.

The lockdown and economic downturn caused the chief executive and co-founder of Uncharted, a Denver-based accelerator helping start-ups aiming to solve social and community problems, to doubt whether the four-day plan would work. “The question became, is this the best time to do it? Or is it the worst time to do it? We had lost some funding and revenue and things were tight. We had to lay off a few people in early April.”

It seemed logical to encourage workers to put in more rather than fewer hours. Yet after a few weeks of remote working, Benitez saw employees were overloaded from video calls and juggling work with home schooling. “We decided [it] was not the worst time but actually the best time [to go to four days].”

So in June, to boost productivity, he cut his 13 employees’ working week.

Coronavirus has disrupted working life across the world. Many white-collar workers discovered they did not have to go to the office every day to continue to do their jobs.

Yet it was not just where work was done that changed but also when, prompting some businesses to re-evaluate conventional nine-to-five (if you were lucky), five-day working patterns. Those who have had to work around childcare or other caring responsibilities have demonstrated that as long as the work is done, it may not matter when it takes place.

Gemma Dale, a human resources consultant and lecturer at Liverpool John Moores University, says that when it comes to debates about work in the Covid era and beyond, there has been too much focus on where work is done, rather than on the hours worked.

“People are using this [period] as an opportunity of reflection. It is showing up in the desire to live differently,” she says.

Executives have reappraised the necessity of commuting and business travel, for example. Though she acknowledges it is impossible to generalise about how reflective workers could be. “People’s experiences have been very different from being burnt out to baking banana bread,” she says.

For those adults who did enjoy aspects of the restrictions to their lifestyle imposed by Covid-19, the Office for National Statistics found that many liked the slower pace. Almost nine in 10 (86 per cent) of adults who reported that they were enjoying spending more quality time with the people they live with wanted to continue doing so after the pandemic was over.

Alex Soojung-Kim Pang, author of Shorter, which lays out the case for boosting productivity through a shorter working week, says that working from home has also made employees think about how much time had been spent on “supporting activities” such as commuting and personal grooming.

As offices open up, organisations may need to stagger start times. This could allow them to take in employees’ scheduling preferences, say researchers, including the times of day they are most productive, as well as helping to avoid overcrowding at work and on public transport. The key is consultation and predictability – lacking control over hours can harm employees’ wellbeing.

Against the backdrop of widespread job losses, employees will hardly feel able to dictate their working conditions. And shorter working hours on full pay will not be front of mind for employers struggling to keep their companies afloat.

Heejung Chung, reader in sociology and social policy at the UK’s University of Kent, says: “What you will probably see more in companies is [they] get people to go on four-day week contracts to save costs. What happens to mothers all the time is the work doesn’t decrease, just the pay.”

Many – particularly those on lower incomes – who have had their pay cut will want more hours rather than fewer.

Campaigners for shorter working weeks argue that the four-day week could be a way of redistributing work. A recent proposal by Autonomy, a UK think tank focused on the future of work, made a case for a shorter working time subsidy scheme to prevent lay-offs, reallocate hours and retain jobs as the German Kurzarbeit scheme does.

In May, New Zealand prime minister Jacinda Ardern raised the prospect of four-day weeks to boost leisure and travel industries.

Whatever the rationale, reducing hours needs careful planning. In May, Uncharted’s staff were given a month’s notice to prepare to reduce their working week by clarifying goals and streamlining work.

“It was really figuring out what we say ‘no’ to,” says Benitez. All employees were asked to be available on Mondays to Thursdays between 10am and 3pm for meetings and collaboration but otherwise they could arrange their time themselves.

While Fridays are the company-wide day off, Benitez wants to ensure flexibility, for example, a parent working five short days to fit with school hours. After monitoring progress through an independent evaluation, he is convinced of the benefits of the four-day week.

On average, the working week reduced 23 per cent from 45 hours. Some employees were concerned that by making every hour count, there was less room for fun, although that could also be a result of remote working during a pandemic.

Plans for a four-day week had already been under way before the pandemic at 3D Issue, a software company based in Donegal. But Paul McNulty, founder and chief executive, says the crisis has sharpened his resolve to cut hours as a way of attracting new talent in a competitive local market.

When the working week was cut, he saw “greater happiness among employees. Some of them talk about having a day to themselves when kids go back to school. They are more refreshed and engaged.”

For David Cann, managing director of Target Publishing, it was coronavirus-induced financial difficulties that pushed him to make difficult decisions. “To get us through this we needed to take a 20 per cent pay cut to ride the wave. I didn’t feel quite comfortable. For people on a lower wage it felt like a big ask.” So he cut hours too, giving everyone Fridays off. “The team started to work well together. We produced the same amount of magazines.”

He says his 20-strong workforce are not working compressed hours but rather that they are more efficient – remote working had shown Cann that meetings could be streamlined.

“It’s early days but it feels right. What that’s achieved is thinking you shouldn’t be scared of change. Covid makes you think differently; I probably wouldn’t have done this unless it was forced on us.” – Copyright The Financial Times Limited 2020