Visa firm cites India as largest source of foreign workers, followed by Pakistan and US 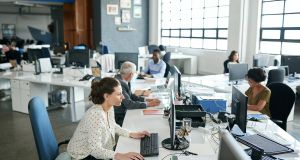 The Irish ICT sector was the area most likely to seek visas for foreign staff. Photograph: iStock

The number of Irish work permits issued in 2016 is set to rise by 35 per cent by the end of the year, new figures released on Thursday show.

According to data from visa company VisaFirst.com, year-to-date figures show that nearly 31 per cent more visas were issued in 2016 than in the corresponding period a year ago.

VisaFirst is using figures from the Department of Jobs, Enterprise and Innovation, which showed a total of 8,007 applications granted by the end of October. Only 17.5 per cent of those visas were renewals; the rest were new applications.

The Information and communications technology sector was the area most likely to seek visas to bring foreign staff into their Irish businesses.

In terms of individual companies, however, the HSE topped the list in the first six months of the year, with more than 1,000 applications. That was almost four times the number of applications made by Google, which ranked second, with Accenture and Intel further back.

India was the most popular source for foreign workers, accounting for 30 per cent of all applicants in the first half of the year, followed by Pakistan with 14 per cent. Other countries with significant numbers coming into Ireland were the United States, Brazil and Sudan.

VisaFirst’s managing director, Edwina Shanahan, said the growth was a positive sign for the economy.

“Ireland’s business sector is emerging from a slump,” she said. “And, to deal with this growth, it’s common for employers to bring in employees from overseas to fill positions which cannot be filled by workers from the domestic workforce.

“This is a common sign in many strong economies, and the fact that Ireland’s workforce is deficient in certain areas is not really something that should be seen as a negative. It’s practically impossible for any economy to have a strong workforce in absolutely every area of industry and business.”

The figures show that, alongside the strong growth in new working permits issued, there was also a rise in the number of rejected applications. This figure almost doubled in the period to 1,223.

Ms Shanahan speculated that the jump in rejections could be down to poor or insufficient details in applications by employers.

“The time and money wasted by incomplete applications can be significant,” she said. “ Ideally, the employer should get it right the first time to save them having to go through the process all over again.”