Youth unemployment also slips to 15.5%, according to new CSO figures for November 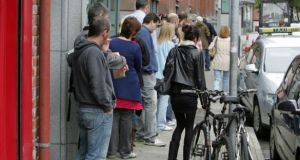 The unemployment rate for women in November was 6.1 per cent – down from 6.2 per cent in October. Photograph: Frank Miller

The Republic’s unemployment rate fell to a new post-crash low of 7.3 per cent during November, according to the latest figures from the Central Statistics Office.

Merrion Stockbrokers economist Alan McQuaid said the fall in the figrues may “to some degree” be down to people returning to education or taking up training schemes.

“Although emigration has been a factor to some degree in keeping unemployment down since the financial crisis, the labour market has improved dramatically in recent years, reflecting the strengthening of the economic recovery,” he said.

“Meanwhile, in the third quarter of 2016, employment rose in twelve of the fourteen economic sectors on an annual basis and fell in the other two in the quarter.”

The greatest rates of increase were in the accommodation and food service activities sector, which rose 9.6 per cent or 13,400, and in construction, which rose 7.3 per cent or 9,300.

“The pick-up in the latter is particularly encouraging given that it was the building industry that suffered the worst in the downturn,” said Mr McQuaid.

The outlook from next year on however, is “more uncertain” in light of Britain’s impending exit from the European Union.

“Increased labour market participation will also impact on the numbers,” he said. “Still, we expect the downward trend in unemployment to continue over the next twelve months, albeit at a slower pace than before.”

“Government policies strongly influence almost 48 per cent of the costs in the Consumer Price Index,” he said. “They must act now to reduce these costs, in health, education, housing, rent, insurance and travel”.

Mr McDonnell called on Government to reduce business costs to below the EU average, target capital investment in job rich infrastructure, outsource more state sector services to SMEs, and to reform the social welfare system to make it more profitable to work.

“If Government-controlled costs are reduced, workers would have more money in their pockets,” he said. “This would reduce the calls for pay increases, and would allow employers take on more staff.”