Best country in the world to attract talent? It’s not Ireland

But we still rank 18th out of 61 countries, according to World Talent Ranking report 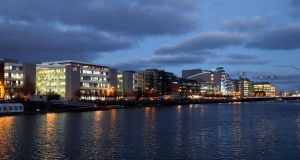 Ireland ranked behind Germany, which finished 11th but beat the UK, which was ranked 20th. Photograph: Chris Ratcliffe/Bloomberg

Ireland may pride itself as a good place to do business, but when it comes to the places that are top in developing, attracting and retaining talent – we haven’t quite cracked the global elite.

That’s according to the latest World Talent Ranking report, from global business school IMD, which looks at how countries sustain the talent pool necessary for businesses to maximise their performances.

Ireland slipped two places from the last edition of the ranking, coming in at 18th for 2016.

The list found nine of the top 10 economies were in Europe – with Switzerland, Denmark, Belgium, Sweden and the Netherlands in the top five.

Finland, Norway, Austria and Luxembourg are the remaining four European countries in the top 10, with Hong Kong the final one in the top 10.

Among some of the key factors affecting Ireland’s ranking were the economy’s ability to tap into the overseas’ talent pool – in which Ireland was ranked sixth – and availability of skills and competencies in the talent pool, where Ireland scored 12th place.

But in regards to investment and development of home-grown talent, Ireland only ranked 32nd out 61 countries, although the economy’s standing had improved compared to the 2015 report.

“Talent is one of the competitive pillars of Europe,” said Professor Arturo Bris, director of IMD’s World Competitiveness Center.

“It’s true that the region generally continues to face a number of problems, including poor economic growth, declining momentum and negative expectations. But the quality of its education systems and its commitment to developing talent from a very young age to retirement should preserve its long-term competitiveness.”

Ireland ranked behind Germany – which dropped from 10th to 11th place – and Iceland, but beat the UK, which came in at 20th place.

France was in 28th position.

“Germany has been hit particularly hard, as is reflected in its loss of top-10 status. This is due to a combination of worsening business sentiment, which lessens the country’s appeal to talent, and a decline in both education investment and quality of life,” Professor Bris said.

“Times change, and the fact that Northern Europe offers the world’s greatest concentration of business talent hotspots is now largely due to the Nordic countries.”

He attributed this to the education system feeding the economy with the necessary talent.