Your child’s nativity play is just a big guilt trip

Who do you let down, your children or your employer? 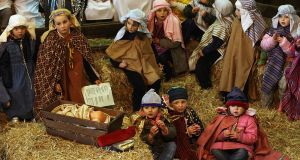 What do you do? Ditch your child or ditch work?

About this time last year, I took the morning off work to watch my son don a crown and pull baby Jesus’s pants down. Who knows what this year’s nativity play will bring?

Plays, concerts, special assemblies, prize-givings and sports days can make working parents feel guilty – do you let down your employer or your child? According to research conducted by Working Families, a UK charity, this year more than two-thirds of working parents of children under 18 said their job interfered with their ability to take part in school or nursery events.

This rang true for one friend who works in public relations. He told me that he frequently misses his sons’ school events because of work commitments so makes up for his no-show with films, football or food – although his guilt is largely alleviated by the fact that his wife works part-time and attends most things.

Other families with two working parents do it in relay, ensuring that at least one attends school events.

Some refuse to feel guilt or obligation. Nativity plays are a pointless guilt trip, one friend told me. “I was delighted to see the back of them.” In any case, he reassures himself he is better than his own parents, who only attended one sporting event and one concert in his entire school career.

One parent has become so disenchanted with school activities that he has scratched them all out of his diary, preferring instead to get home for dinner and help the children with their homework. Another who works in advertising employs a “50-50 rule”.

“Half the time I put work first. The rest of time I tell work I’ll be working from home as there is an important event for one of my kids. I’ve always made it pretty clear that if my employer doesn’t like it they can stick it.” Of course that is much easier now he runs his own business.

Ben Black, the director of My Family Care, which works with employers on family-friendly policies, has a zero-tolerance policy on missing school events. “Most children think their parents are the greatest parents in the world, until about age eight or nine when the truth dawns on them that they possibly aren’t. So attending an event when you still have that golden halo is truly magical.”

Do men and women differ on this issue? One manager observed that her male employees would baldly announce that they would be late in after seeing the nativity play.

While the women, she said, tend to contort themselves with guilt, apologetically asking for permission or pretending they are at an external meeting. One colleague snuck out to her son’s school play under the guise of a doctor’s appointment, only to see a well-known male politician at the school, tweeting ostentatiously about his little angel beholding the baby Jesus.

Some companies have enlightened policies. A few years ago, Asda, the UK supermarket, even ran “nativity leave” to allow their employees to take time off. While a few even incorporate “caring time” into the working day, giving staff time out of their day for caring duties – a school assembly or taking an elderly relative to hospital. The expectation, of course, being that they make the time up later.

Rachel Suff, research adviser for the CIPD, the professional body for human resources, advises employers to recognise that staff have responsibilities outside work. “Employees could work from home around the event or make up the hours in some way, so managers would need a convincing business reason to refuse any requests.”

At the same time, make sure parents are not singled out for special treatment. Ms Suff says that if parents are allowed time off for an event like a school play, then the manager should offer the same to the rest of the team. This could mean allowing staff to leave early for Christmas shopping or whatever they choose.

Mr Black believes that if you are prevented from attending a school play, it is a good chance for a conversation with your manager. If that does not work “then quite simply you’re working for the wrong organisation”.

1 Wet pub openings fuelled big rise in Irish Covid infection rates
2 Chris Johns: Economies may enjoy ‘roaring twenties’ if ministers learn lessons
3 Basic income for all: Has the Covid crisis given us a new economic model?
4 Direct sea routes to Europe offer certainty in choppy Brexit waters
5 Only way is up for Stripe as valuation skyrockets
6 How long can Government afford to keep State pension age at 66?
7 Pandemic brings a halt to Zara-owner’s Irish expansion
8 How to gift your child a house deposit . . . tax free
9 ‘I don’t need to do any of this. . .I don’t actually need to work.’
10 Karlin Lillington: How I managed to cut my mobile phone bill by at least half
Real news has value SUBSCRIBE