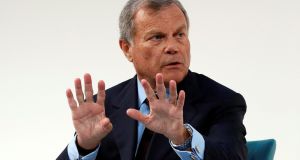 Martin Sorrell, head of WPP: last year his pay package was £70.4 million, paid in cash and shares, taking the total he has earned at the advertising group since 2009 to £190 million. Photograph: Stefan Wermuth/Reuters

Oh the irony . . . just as the government was publishing details of its proposals for a crackdown on executive pay on Tuesday, details were coming through of the latest multi-million pound share award for WPP’s Sir Martin Sorrell.

The long-standing chief executive of WPP was rewarded last year with one of the biggest pay packages in British corporate history, a cool £70.4 million (€82.7m). It was paid in cash and shares, but mainly shares, and took the total he has earned at the advertising group since 2009 to an astonishing £190 million.

Yesterday Sorrell was granted options over another 657,000 WPP shares under the group’s controversial long-term incentive scheme. These will be exercisable in 2021, depending on the group’s performance, but are worth just over £11 million at the current share price.

Sorrell, the man who put the word “excessive” into executive pay, has always robustly defended his rewards. When his 2015 package was confirmed earlier this year, he insisted he was worth every penny, having built up the business over three decades.

Theresa May rows back

So what will the government’s proposed corporate governance reforms mean for executives such as Sir Martin? Precious little, it seems, as prime minister Theresa May has backed away from demanding the sweeping changes she had floated just a few months ago.

The government’s proposals, published in the form of a “green paper” or discussion document, reveal that binding annual pay votes for shareholders may not now be imposed on every company. Instead, they may be brought in only where shareholders have previously opposed pay in significant numbers, and may apply to only part of an executive’s pay package.

On the growing gulf between pay for executives in the boardroom and for ordinary workers on the shop floor, the green paper shows a distinct lack of commitment to the publication of a pay ratio.

Calculating the gap between the best and worst paid in a simple ratio might produce misleading results that could be “misunderstood,” the paper said. Any new reporting measure would need to be “carefully designed”, it concluded.

Even before Tuesday’s proposals, May had already back-tracked on a plan to have worker representatives on boards, an idea she first floated in July, when she was campaigning to replace David Cameron.

“If I’m prime minister,” she said, “we’re going to change that system – and we’re going to have not just consumers represented on boards, but employees as well.”

Once elected, she repeated her plan for workers on boards, telling the Tory party conference that plans would be published later in the year. By the time she came to address the CBI annual conference last week, however, May had heeded the howls of protest from big business – and several members of her own cabinet, including chancellor Philip Hammond – and rowed back on her promise.

Although it was important their voices were heard, companies would not be forced to appoint worker or consumer representatives directly to their boards, she told her relieved business audience. Instead, companies should be allowed to “find the model that works” for them.

Twenty years ago, the average chief executive was paid 40 times as much as the average worker, according to the High Pay Centre. Today, the ratio has soared to 130 times. Allowing companies to find a model that works for them is unlikely to succeed in narrowing that gap.

Predictably, business lobby groups welcomed the green paper. But unions warned it would not do enough to shake-up corporate Britain. “This is not what Theresa May promised,” said the TUC’s Frances O’Grady. “The prime minister vowed to govern for working people. She should let them have a say where it really matters.” The TUC said it would make its opposition to the proposals clear to the government during the consultation process.

There was a lukewarm reception, too, from the BEIS (Business, Energy and Industrial Strategy) committee, which has been busy in recent months investigating corporate scandals including the collapse of Bhs and working conditions at Sports Direct.

Iain Wright, chair of the committee, noted that May entered Number 10 Downing Street with talk of giving workers a voice on companies’ boards. While the government’s announcement was welcome, “tentatively setting out a range of options in a Green Paper suggests a government whose resolve may have weakened on getting to grips with corporate governance”, he said.

The debate on pay is far from over; indeed, the BEIS committee plans to question business secretary Greg Clark at a session next month on pay and diversity in the boardroom.

Countries that fail to attract immigrants will lose out – Microsoft chief 12:07
Long-hyped smart fridges will never run out of milk or data 12:02
State subsidises public sector retirees to cover gap until State pension 11:57
Trump holds America up as ‘example for the world’ at Davos 11:57
My father in a nursing home wants to gift me his house 11:23

1 Who are Ireland’s 17 billionaires?
2 State subsidises public sector retirees to cover gap until State pension
3 My father in a nursing home wants to gift me his house
4 Richer countries must do more to tackle climate change, Thunberg tells Davos
5 Nama lends Cosgraves €15m to fund huge apartment development
6 Insolvency arrangement approved for man with €60 million in debts
7 Health insurance: Switch often for your financial wellbeing
8 Are there annual limits on inheritances or gifts to a child?
9 Property firm sues engineering company over waterproofing of basement
10 Teenage Clicks: Why we should be concerned about addictive smartphone apps
Real news has value SUBSCRIBE