However stubborn and difficult our parents may be, the time we have with them should never be taken for granted 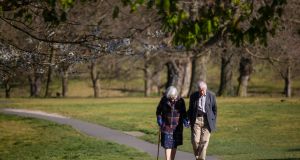 Researchers predict that people aged over 70 will account for 63% t of Covid-19 deaths in a country such as Australia, even though they make up just 11% of the population there. Photograph: Simon Dawson/Bloomberg

In the space of two days last week I spoke to three business people who were all wrestling with the same coronavirus conundrum. Each had been slowly getting to grips with nervous investors or dwindling customers or far-flung teams of work-from-home colleagues. But none had conquered one group of incorrigible reprobates who were making life a misery: parents who refused to stay at home.

“It’s unbelievable,” muttered one manager whose 80-something father lives alone in a distant town and insists on going out for the paper each day. “He just won’t listen.”

This man had been in fraught talks with middle-aged siblings trying to work out what to do. Friends in London have been doing the same.

I cannot hear enough of this stuff. My mother, also in her 80s, has been going to the supermarket, the post office and who knows where else in her small town in Australia.

“I’m being very careful,” she told me the other night on FaceTime, as I struggled to stop myself shrieking “have you not heard of deliveries?”

This generational role reversal is only one of the jolting shifts unleashed by the coronavirus crisis – and hardly the most dire. All the employed people I was speaking to last week still had their jobs. None was trying to corral young children along with a parent. And it is not as if the worrying only goes one way, as my mother constantly reminds me.

Yet the wrenching toll this pandemic is taking on the elderly is only beginning to be felt. Researchers predict that people aged over 70 will account for 63 per cent of Covid-19 deaths in a country such as Australia, even though they make up just 11 per cent of the population there.

I was thinking about those numbers the other day when a friend sent a rude but rather good video clip made by a British comedian called Mitch Benn. Dressed up as a wartime recruiter, he reminded his locked-down compatriots that in their time of national crisis they were being called upon to slob around on the sofa and watch Netflix.

New Zealand’s police force has taken up this theme with admirable gusto. On its Facebook page it has posted a notice saying that for the first time in history “we can save the human race by lying in front of the TV and doing nothing. Let’s not screw this up.”

I applaud both efforts. They are funny, well-intentioned and I hope effective. Yet the truth is that we are being asked to do a lot more than lie about at home in our pyjamas.

Grandparents who are acutely aware of their limited time on the planet are being asked to stay away from their grandchildren for an unknowable length of time.

Older people who live on their own are being told to shun the cafés and golf games that have offered years of cheering company.

People of all ages are witnessing events that would have been unimaginable only a few short weeks ago.

As I write this my London street has erupted with the almost medieval sound of people leaning out of their windows to bang their saucepans and cheer healthcare workers who stand between us and disaster.

Meanwhile, headlines scrolling across the television screen show the staggering number of people who have suddenly been thrown out of work across the world. In my immediate family three people lost their jobs within days last month. Others wait in dread, and all of us know it could be far worse.

As travel chaos spread across the world two weeks ago, a friend who lives abroad discovered his mother had just been taken to hospital in London for a problem unrelated to Covid-19. He did not manage to make it back before she died.

At the same time another friend was trying to help an Italian man who was stranded in Peru just as his parents in Lombardy were struck by Covid-19. They died two days apart.

Those stories are a reminder of something I suspect a lot of us are rediscovering. However stubborn and maddening and difficult our parents may be, the time we have with them should never be taken for granted. – Copyright The Financial Times Limited 2020