‘Never dilute your Irishness to fit in like past generations did’ 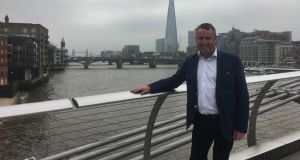 James Hourigan: “That was a fascinating time, with work designed to make a real difference in fighting the awful results of people trafficking, modern slavery, terrorist financing and other criminal activities.”

James Hourigan attended the CBC in Cork before going on to a business studies certificate at what was then Cork RTC while working in a number of bars and nightclubs part time.

In 1987, after completing the course, he boarded a ferry with six others from Rosslare to Le Harve on route to Munich where they worked in the BMW factory during the day and played hard when they weren’t working.

“My intention was to stay in Munich as it is a great city. However, with limited professional opportunities available to those without a real grasp of the language, I upped sticks for London. At that time, the job market in Ireland was very tough and, without excellent qualifications and knowing someone who would give you a break, opportunities were few, and in my case non-existent.”

On arrival in London, Hourigan fell into banking as that job market was buoyant. Soon afterwards, he started working in compliance – advising businesses on how to comply with legal and regulatory obligations.

Compliance officers were seen as internal police by the traders in those days. “In the 1980s, the regulations in banking were quite unsophisticated and, for the NatWest Group, there were just 10 of us in that department. That number is now in the thousands.”

From NatWest, Hourigan went on to Nomura where, for eight years, he advised clients on money-laundering, bribery, corruption and the sanctions involved. He also completed a law degree at University of London part-time.

“After Nomura, I went to Bank of America for six years where I was head of compliance training for EMEA, training the European workforce. It meant a lot of European travel which I loved.”

Hourigan then spent five years at JP Morgan and three heading the financial crime training and communications team at RBS. At RBS, he got caught up in what he euphemistically calls a “cost challenge”. The bank was in state control and his role was cut in a restructure.

“After redundancy, I spent nearly three years at Standard Chartered bank, That was a fascinating time, with work designed to make a real difference in fighting the awful results of people trafficking, modern slavery, terrorist financing and other criminal activities.”

To put his role in context, he explained: “Take the migrant crisis. If there are 100 people on a boat paying €5,000 each for the trip, that amounts to €500,000 for one boat. Criminals need to get that money into the banking system. Our job was to make it as difficult as possible to achieve.”

Standard Chartered was passionate about trying to fix these issues, he says. During this time, he frequently worked in Singapore and New York and also visited India and Dubai.

Take the migrant crisis. If there are 100 people on a boat paying €5,000 each for the trip, that amounts to €500,000 for one boat. Criminals need to get that money into the banking system. Our job was to make it as difficult as possible to achieve.”

After Standard Chartered, Hourigan decided to set up his own company, J&J Compliance Consultancy, to design and deliver financial crime training programmes in major financial institutions.

Having been made redundant twice and having seen a squeeze in headcount at banks, the opportunities for senior roles were becoming less frequent. “Firms are trying to control fixed costs and are looking to consultants and contractors to fill the gaps. From my perspective, that has been a positive change from a salary point of view, but I have lost payments to pensions, healthcare and other benefits I had over the years – it’s give and take but it’s the way the industry is moving.”

Hourigan sees London and Dublin as very different cities. London has dominated financial services for hundreds of years and, even though Brexit will have some impact, he feels that it will remain dominant.

“Ireland appears much more focused on technology and pharma, which are much younger industries, with a younger workforce and dynamism. It’s hard to compare a country of five million to 65 million but Ireland has a young and well-educated workforce and must use that as a competitive advantage.”

His advice to anyone thinking of moving to the UK is that the culture is similar but certainly not the same.

“If you are Irish, you will be popular in the UK as we are well-liked. London is expensive so you will need a decent amount of cash to get started. Southwest London is great and east London is now trendy and has a lot going for it. Other than a beach, London has it all so, on weekends, get into the centre and enjoy it.”

The Irish are seen as educated, intelligent and friendly.

“Never dilute your Irishness to fit in like past generations did. Celebrate it, exaggerate, enjoy it and it will take you far,” he says.

London is a 24/7 city with everything at your fingertips. However, you need to breathe and ease your way in or it will exhaust you.

“I love visiting Ireland, and am Irish through and through. However, as much as I am a proud Cork man, I am also a proud Londoner. This is where my three children were born and reared and it is our home.”