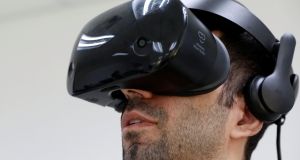 Virtual reality is used to assess candidates for jobs where it would otherwise be impossible to put them in the real-life situations they will face. Photograph: Reuters/Soe Zeya Tun

As I step into an Egyptian tomb holding my burning torch I look around, then walk across to the far wall where my task is to solve a puzzle involving various symbols.

This is not the realisation of an ambition to be in an Indiana Jones film. It is a virtual reality exercise used to assess graduates applying for a technology role at Accenture, the professional services group.

The advantage of introducing VR to a candidate assessment programme is that “seeing people in action is a better indicator of their potential”, says Adrian Love, Accenture’s recruitment director for the UK and Ireland. The virtual world is all encompassing so “your brain cannot fake it”, he adds. “You can’t game the system.”

Other simulations test the mettle of potential graduate consultants. One offers entry into a virtual meeting room with slides on the wall providing details on a specific project. I select an exercise from the tablet device on the conference table and am given eight minutes to assess the information presented in the charts and other formats. When the time is up a telephone on the conference table rings and I have to give a project briefing.

Accenture is using the VR assessments for both consultancy and tech roles. The company says it is not looking for people who can find the right answer in the quickest time, but rather it examines how they deal with the situations presented to them.

While VR has yet to go mainstream, the pandemic is accelerating interest in the technology in a number of areas, including recruitment, says Jeremy Dalton, head of VR and augmented reality at PwC.

“This is to be expected as people seek ways to connect more deeply while maintaining social distancing,” he says.

He cites his own experience of a recent virtual team meeting using a platform called Spatial. Via digital avatars the team can be “next to each other, having a shared experience in the same space without the danger of transmitting the virus”.

He believes in the future managers and candidates who are in different places could put on headsets and join each other in a virtual environment.

Mr Love adds that while virtual recruitment can remove location issues, Accenture intends to continue to use the same technology when face-to-face engagement can return.

According to a 2019 report by PwC, VR and augmented reality – which presents digital information, objects or media in the real world through a mobile device or headset – have the potential to boost global GDP by 2030 by up to $1.5 trillion (€1.34 trillion) by allowing developments such as new customer experiences, speeding up product development and improving workplace safety.

Mr Love says that Accenture decided to introduce VR technology to its graduate scheme’s assessment process because “we’re a tech company so we wanted to showcase [that]”. It also helps improve the recruitment experience for both the company and applicants. Even if they don’t get the job candidates can still learn something.

Okikiade Oloyede, a consultant at Accenture who was put through her paces in two VR exercises during her recruitment, says it is a really good way to assess people.

The two-stage process included a choice of activities, including naming as many planets as possible or even critiquing capitalism versus socialism. There are no rules on how many activities that the applicants can choose to do. They can focus on one or many: the purpose is to see how individuals choose to work.

Ms Oloyede says: “Because you’re in a new environment you have to...stay grounded, remain calm and focus on your objectives.”

Importantly, she feels she was able to be herself. “I was able to show different parts of my personality.”

With an increased awareness of neuro differences and that the best candidates may not necessarily perform well in an interview, VR can level the playing field. It offers a “compromise of connection and privacy”, Mr Dalton says. The connection through an immersive, shared experience and the privacy allowing people to put forward an image of their choosing through a digital avatar and environment “gives them a sense of control over the experience” .

Virtual reality is already being used to assess candidates for jobs where it would otherwise be impossible to put them in the real-life situations they will face.

London’s Metropolitan Police, for example, use VR during assessment days, where candidates work in pairs in a scenario-based exercise.

VR is also helping the adoption process. Adopt South – the regional adoption agency made up of Hampshire, Isle of Wight, and Portsmouth and Southampton City councils – is using a VR experience developed by the Cornerstone Partnership which allows prospective adopters to experience the traumatic scenarios children have faced by placing them, as the child, in a room with abusive parents or other adults. Rachel Reynolds, head of Adopt South, says the VR, used in the first two stages of the adoption process, has been transformative.

The change of perspective – putting the user directly into someone else’s reality – means that VR is becoming a valued way to train employees in customer-facing roles. US retailer Walmart has distributed Oculus Rift headsets to its training academies. Shop floor staff use it to learn how to deal with crowds, spot hazardous situations and replenish stock.

While headset prices have fallen in recent years, PwC’s report points out that the cost of high-end VR and AR hardware, as well as developing applications and virtual environments, is still a deterrent for some businesses.

However, Mr Dalton says such obstacles are being eroded, and believes it offers a great way for candidates to see and get a feel for work environments.

As lockdowns have left the office water cooler abandoned, some companies are adopting 3D virtual spaces in attempts to maintain those chance encounters that are a catalyst for creativity.

One such company is WeTransfer, the computer file transfer service. This month it launched a 3D virtual office modelled on its Amsterdam headquarters. Developed by creative agency Achtung, employees create avatars to enter the space, which WeTransfer uses for social interactions such as happy hours, informal coffee meetings and other in-between moments.

“We felt a 3D office that reflected our physical space would give employees a sense of familiarity and comfort, along with a fun experience to brighten up the monotony of quarantine,” says Gordon Willoughby, WeTransfer’s chief executive.

Another platform, Teooh, allows for virtual events where people can come together inside a digital venue. Users can host events ranging from panel discussions to networking gatherings or group meetings which can be accessed from any desktop device.