I’ve had some sensational mentors, it’s just that neither they nor I knew it 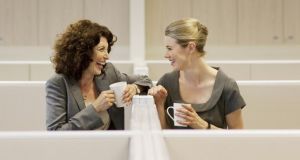 The best mentors can be the worst employees. Photograph: iStock

When I got back to work after the summer holidays last week, I noticed glossy posters had been plastered around the office urging people to become a mentor.

I took a very close look, having come across a stunning case of mentoring while reading a novel on the beach called The Power by British writer Naomi Alderman.

The book itself is not about mentoring, and should be avoided unless you want to read about an imaginary future in which girls can reduce men to a bloody crisp of electrified gobbets just by touching them. But it had an unusual dedication: to Margaret Atwood, the acclaimed writer.

Atwood, I discovered, had taken Alderman under her wing in a mentoring scheme a few years ago and, as Alderman writes in the acknowledgments, “believed in this book when it was barely a glimmer, and told me when I faltered that it was still definitely alive, not dead”.

This turned out to be a fateful move – for Margaret Atwood. Both her novel, Hag-Seed, and Alderman’s were longlisted for a big literary award this year, the £30,000 Baileys Women’s Prize for Fiction. Alderman won.

Several thoughts raced through my head when I learned this, not least: why on earth didn’t I ever have a mentor?

Corporate mentoring schemes have spread relentlessly in the past 20 years, mainly because companies have realised that making employees happier and more loyal can save a bundle on recruiting new ones.

But they barely existed when I started work in the 1980s on Australian newspapers, and by the time they did I was deemed old enough to be a mentor myself.

Luckily, all my mentees seemed to be a good 30 IQ points cleverer than I was and patiently sat through my bumbling efforts to encourage them without suffering any obvious lasting damage.

But as I thought more about that Atwood-Alderman episode, I realised I have had some sensational mentors throughout my career. It is just that neither they nor I knew it.

I blame this on the persistence of several mentoring myths.

The first concerns the nature of the ideal mentor. In corporate schemes, the most senior and successful people tend to end up in this role. But in my experience, the best mentors can be the worst employees: gossipy, indiscreet and epically uninterested in workplace rules. One of my favourites was a middle-aged man who worked on a newspaper I joined many years ago, where I had to commission stories from dozens of reporters I had never met, with no clue about their backgrounds or abilities.

Seeing me struggle, he wrote a list of reporters’ names, alongside a blistering description of their respective defects, from the grammatical to the intellectual and psychological.

It transformed my job, though it would have ruined his if it had ever become public knowledge.

There is another myth about ideal mentoring advice. It goes without saying that it should be uplifting rather than crushing. But blunt honesty is invaluable.

When I first started working on London newspapers, a female editor took me aside and said: “You have two big problems here: you’re not a man and you’re not British.” On top of that, she said, “you’re invisible”. If I wanted promotion I needed to get around the office a lot more.

She was right – though since I was too useless to know exactly what I wanted to be promoted to, the advice was largely wasted. I was also too inept to grasp something widely understood in politics and lethally effective in the office: it pays to ask for help. Potential mentees should remember this, especially timid ones.

In a world of impossible workloads and deadlines, approaching someone for assistance can be daunting.

But the truth is, people are often flattered to be asked for advice and once they have doled it out, they tend to like the person who sought it.

Just one caveat: the request must be sincere. Conscripting the boss by pretending to want help might seem an effective ploy. But if they are too dim to realise what is going on, do not expect their advice to be much better.