Jones’ road: From coaching GAA to the backroom team of the Houston Texans 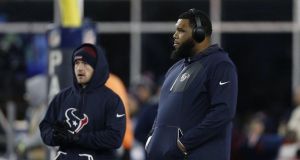 Ian Jones and offensive guard Jeff Allen before the Texans playoff clash with the Patriots in January, 2017.

In 2010 Ian Jones was a second year Arts student in University College Cork. Today he is part of a backroom team preparing the Houston Texans for its first regular season game of the new NFL season on Sunday, at home to the Jacksonville Jaguars.

It has been a circuitous though incredibly quick path to becoming the assistant strength and conditioning coach at the American Football giant – one paved with hard work and good fortune.

“In 2010 I was doing a degree that wasn’t related to strength and conditioning,” says Jones, “but I had started doing some voluntary work, mainly coaching in the GAA. A guy I knew, Mark Kilgallon [who is now head strength and conditioning coach with the Sydney Swans] was with the sports institute of Northern Ireland at the time and was looking for someone to work with Irish hockey players in the Munster region.”

Kilgallon saw potential and encouraged Jones to stick with it, even promising to help secure an internship in the US.

“The guy I work for now, Craig Fitzgerald, was the head S&C coach at Harvard University in the mid-2000s,” says Jones. “Mark had worked for him at Harvard, so he put me in contact with him to do an internship at University of South Carolina football – where Fitz now worked.”

For decades, US college football programmes have pioneered fitness and physical performance professionals. “It was eye-opening. I was only 19 and had never seen anything like it. There were 130-players, a million-dollar facility [the college football stadium has a similar capacity as Croke Park]. I didn’t know what to expect, but I fell in love with it over the summer.

“That first internship, I probably learned more in sheer quantity in that 3½ months than I would have in 3½ years doing little bits in Ireland. I was training a GAA team 1½ hours a night, three nights a week. In South Carolina, I was working 12 hours a day – coaching for eight of them – seven days a week.”

Jones went back to South Carolina the following summer and, in between, finished his degree and worked with several other sporting teams in Ireland including the Cork minor footballers.

Then, in 2012, he saw a position advertised with London Welsh rugby club, which had just made the jump up to English Premiership. “So I was able to do graduate school [at Middlesex University for strength and conditioning] one day a week and by night and work with London Welsh full-time for that year.

“That was a very different experience. You were working in premiership rugby – a top tier in European rugby, but you are at a club where the [S&C] budget was nothing. You are working with less than you would have in the college system in America. I was surprised at how low-level, how unprofessional the set-up was.

“I was still in contact with Fitz, and had sent him an email in July 2013, saying ‘look, I don’t think this [London Welsh job] is going to go any further’, and he wrote back saying he could do with some help. He was now with Penn State. He said I’d have to be there within two weeks, as that was when training camp starts.

“He pretty much created a position where I’d assist him with football, and also work with 30 other sports in the athletic department. It’s a monster of a university, in the middle of Pennsylvania. The football stadium takes 110,000 people, it’s crazy money, crazy huge alumni.”

Fitzgerald eventually left to become head strength and conditioning coach with the Houston Texans, but Jones stayed for almost three years at Penn State. His experience meant he was the obvious choice for the college rugby squad, and for the US women’s rugby team which had a base there.

“I was able to go to Canada on tour with them, Wales and England too, and then the World Cup in France in 2014.”

After soaking up every bit of experience, it was time for the next opportunity.

“I interviewed for a few things, but hundreds of people had a similar position as I had,” says the Cork native. “I ended up interviewing with the Cleveland Browns in January 2016. They had a new head coach, an Australian guy called Adam Beard who was the director of high performance. He had come from Wales rugby. Mark Kilgallon was academy director with Wales rugby by then, so I had a connection there. So I went up there and I ended up taking a low-level, entry-level position. The lowest man on the totem pole.”

“I was there for three months, when I got a call from Fitz who said someone was leaving [at the Houston Texans] and there was a position available. It was a higher level job with a better organisation – and with Fitz.”

“It was all very fast. I flew to Houston on the Wednesday evening. Interviewed with the head coach and general manager on Thursday. Flew back that night, packed my car, and drove 20 hours back to Houston. Got there Saturday morning and started work on Sunday.”

Like the Cork man, the Houston Texans is a club in a hurry. The NFL’s youngest franchise (formed in 2002) was this year named the 20th most valuable sporting team in the world by Forbes – just behind Bayern Munich and the Boston Red Sox, and well ahead of English Premier League clubs such as Manchester City and Arsenal.

Last season, they took the AFC South division title and beat the Oakland Raiders 27-14 in the opening round of the playoffs on the first Saturday of 2017, before losing, 34-16, to eventual Super Bowl champions, the New England Patriots.

Of course, Houston has been in the news for wholly different reasons over the past few weeks, with Hurricane Harvey wreaking havoc on the city – with more than 125cm of rain in some areas. Because of pre-season training and games, the squad were not in the city for the worst of it, but their families were.

“We couldn’t get back to Houston [from New Orleans],” says Jones. “So we flew to Dallas and used the Cowboys’ facility until it was possible to get back. It was a bad situation as many of the coaches and players had wives and kids stuck in houses, or being evacuated.”

With parts of the city expected to remain flooded for several more weeks, there were doubts until a few days ago that Sunday’s opening game of the season would, or could, be played in the city.

One of the more remarkable fundraising stories has come from the Texans’ defensive end JJ Watt who has raised about $20 million in less than two weeks to help families who have been victims of the flooding.

“He certainly is loved by the city and is the face of the team and NFL,” says Jones.

The stadium was not damaged and the city was anxious to show the rest of the country that Houston was still open for business. And, facing the Jacksonville Jaguars, the home team will be keen to give the locals a timely lift. Among them on the sideline will be the young man from Bishopstown.

In terms of resources, facilities and professionalism – if not in time – it’s a long way from training club teams on Tuesday and Thursday nights in Cork. Still, Jones sees his future being on home soil.

“I don’t know much about the strength and conditioning industry in Ireland, because over the past seven years I’ve been in Ireland so little. Funding, in comparison to the NFL, wouldn’t be comparable. Still, if I can do well enough here [in Houston] in the short term or long term, I’d happily come back to Ireland, just to be there.”

(During training camp for the upcoming season)

“I’m up every day at 3am. The S&C staff train at 3.45am. That’s our time. Then work starts. We preview the day at 6am and set up the weight room. At 7am we train the rookies – thirtysomething of them. At 8am we have a team meeting with everyone in the building. It’s a “this is what the day is going to look like” meeting. At 8.30am the strength and medical staff meet for an injury/rehab report – who’s practicing, who’s not, who needs to work with who, etc. We train the specialists at 9am – the long snappers, kickers and punters. There are five of them. Then at 10am it’s full practice which is normally up to three-hours long. From 1pm-3pm, the non-rookies are taken individually, staggered. After that, players start to head off to position meetings, and it calms down for us. We can eat, and start to review the day, look at data from practice, the weight room and input numbers – whatever needs to be done. At 5pm or 6pm, there will be another full team meeting and at 7pm a final walk-through for the day. Once the meetings are done, around 8pm or 9pm, we’re done.