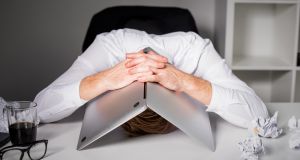 Bad day at the office: “Most boards are far too lenient with control freaks.” Photograph: iStock

If you’ve always thought your boss was at best a narcissist and at worst a psychopath, you could be right. Such personality traits are common in leaders and senior managers, and they can make life hell for those working under them, according to leadership and organisational behaviour expert, Manfred Kets de Vries.

De Vries is a Dutch-born psychologist who has also studied economics, management and psychoanalysis. His forte is combining all four to shed light on leadership success (or more often failure), on why many executive teams don’t work, on organisational change and on cross-cultural management.

As clinical professor of leadership development and organisational change at Insead, he was responsible for setting up the Global Leadership Centre and he has written more than 40 books on management as well as running his own consultancy specialising in organisational development and transformation. He also facilitates full-on training programmes for chief executives willing to get intimate with their shortcomings and he is a big believer in using group coaching to transform underperforming teams.

Interestingly, however, he stresses that creating high-performance teams is not a one-off exercise. “It’s hard work to maintain them,” he says. “What typically happens is that the management changes or the task changes and there is a slackening off.”

The need for trust

“A high level of trust is [essential] for creating boundary-less organisations. Trust takes teams beyond silo behaviour and engages them in true knowledge management,” says de Vries, who was in Ireland recently to speak at the IMI’s Masterclass Series. “In such organisations there will be better conflict resolution; people will be more committed, more accountable and will have better results.”

However, getting to this point means having team members who are willing to be vulnerable and to be assessed by their peers on their strengths and weaknesses. When the process works, what emerges is a strongly bonded team singing off the same hymn sheet. Everything is out in the open and the subtle sabotage that can often derail teams is gone. As de Vries puts it: “There are no longer any snakes under the carpet.”

This type of team coaching exercise can also show up skills gaps and be a timely indicator that the team needs to recruit a new member. Equally, it can flag up if someone is no longer a good fit for the group and needs to move on.

“Once this kind of effective group dynamic is in place, leaders are better able to create great places to work,” de Vries says. “These organisations can be called authentizotic – a term derived from two Greek words: authentikos and zootikos. The first conveys the idea that the leadership of the organisation is authentic, and therefore worthy of trust. The term zootikos means ‘vital to life’. In the organisational context, such organisations help people to renew and reinvent themselves.”

That’s the good news. The bad news is that many organisations will never reach this happy place because they are run by people incapable of recognising what’s authentic – mainly because they don’t listen. De Vries says leaders need to be challenged. While he doesn’t blame employees for being afraid to do this, he is scathing about ineffective boards of directors that fail to do so. “Most boards are far too lenient with control freaks, and one of the problems is that they are typically selected from the same stable,” he says.

De Vries has coined the term the “darker side of leadership” and he reckons it often comes to the fore when people develop an appetite for power. His line-up of well-known dysfunctional business leaders that embody Lord Acton’s famous phrase “power corrupts and absolute power corrupts absolutely” is long and includes media magnate Conrad Black, former Italian president Silvio Berlusconi and movie mogul Samuel Goldwyn, whom he quotes as having said “I don’t want any yes-men around me. I want people to tell me the honest truth, even if it costs them their job.”

De Vries says many organisations have this “gulag” or “yes” culture, often driven by a narcissist chief executive weighed down by the weight of his or her own hubris. “We all need an element of narcissism. Without it there would be no self-esteem, no creativity, no leadership. But very quickly this can turn into a personality disorder, and you end up with malignant narcissists that frequently destroy organisations and then move on. They live in a hall of mirrors surrounded by yes sayers and only hear what they want to hear. There is no reality check.”

To avoid falling into this trap, de Vries says, business leaders should make it their mission to create a culture in which employees have a healthy disrespect for the boss. They should also try to become more self-aware, work on developing their emotional intelligence to pick up on subtle information and undercurrents, get in touch with their strengths and weaknesses, start listening to people and think about what effect their behaviour has on others. If senior managers don’t have their own houses in order they stand little chance of getting the best out of their people and may end up creating a toxic organisational culture that ultimately costs the business a lot of money.

1 Three Ireland switches on 5G network around the country
2 State ‘should bail out’ distressed homeowners
3 Mortgage breaks will not be extended beyond this week
4 Am I paying too much for my buy-to-let mortgage?
5 Should I switch bank now with Ulster Bank at risk of closing?
6 High Court grants permission to pay €2.7m tax bill
7 Pilita Clark: The looming legal minefield of working from home
8 Me & My Money: ‘Money can’t buy you happiness but it can make life a lot easier’
9 State should use Covid-19 impact on building costs to build homes
10 Former junior finance minister to head funds sector lobby group
Real news has value SUBSCRIBE