Farming is Ireland’s ‘most dangerous occupation’

Farmers are 10 times more likely to be killed at work than average worker, report finds 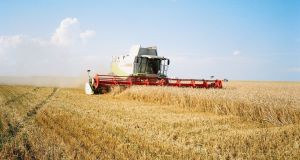 Risky farming practices include not checking that machinery is in good working order before use, according to a report by the Economic and Social Research Institute. File photograph: Bloomberg

The fatality rate for farmers was 10 times that of the average worker between 2009 and 2015, a trend which may be explained in part by excessive risk-taking behaviour, according to a new report.

The Economic and Social Research Institute (ESRI) drew on interviews conducted with 800 farmers in compiling its report titled Risk-Taking and Accidents on Irish Farms, which was published onWednesday.

The publication included a list of common failings by male farmers with no paid employees and found that over a quarter of those interviewed typically do not seek help for difficult jobs, nor do they use safety equipment such as goggles or high-visibility vests.

Other risky practices included not checking that machinery is in good working order before use and not using restraints when treating animals, while 3 per cent of farmers admitted to storing chemicals within reach of children.

Of the 44 fatal workplace accidents recorded in Ireland last year, just under half happened on farms.

The ESRI statistics show that unmarried farmers are less likely to check machinery before use, while those with larger land holdings are less inclined to use safety equipment.

Over a quarter of those interviewed had experienced a “near miss” while working, and 12 per cent were themselves involved in an accident in the past – only half of whom took remedial action to prevent further accidents from occurring afterwards.

Accidents and near-misses were found to be most common on larger farms, and not checking machinery was “significantly associated” with accidents involving third parties.

“The results of this report highlight the significance of getting help with difficult jobs and checking machinery in reducing the risk of accidents in farming.

“Future policies should emphasise the importance of getting help with difficult tasks on the farm, as the research indicated that failing to do so is associated with a higher risk of accidents and near misses,” she said.

HSA chief executive Martin O’Halloran welcomed the publication of the report and said greater understanding of what triggers risk-taking behaviours can contribute to a reduction in accidents.