The pandemic has stalled promotion, but given a chance to think about a job change 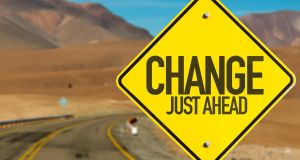 ‘Overall, I think Covid has changed rather than killed career progression.’ Photograph: iStock

The last few months have been tough on those whose plans for promotion or starting a new job have hit a brick wall due to the pandemic. It’s upsetting to have one’s career hopes dashed at any time, but it’s been even harder during the lockdown as people are missing the moral support they’d usually get from friends and colleagues when things go south.

“I’ve never been busier and many people are contacting me because of challenges linked to career progression,” says business coach Sinead Kieran. “The current situation is making people feel vulnerable. They are going through a whole range of work-related emotions, including anxiety, uncertainty and worrying about the future. I have tremendous sympathy for anyone who has lost their job or whose job is under threat, but I think we need to see what’s happening as a chance to take control. Career ownership lies firmly with the individual. The lockdown has given people time to reflect and many have discovered that they’re actually fed up or burnt out doing what they’re doing. Now, they have the opportunity to do something about it,” Kieran says.

“I get people to do an audit of their skills and look at using it to pivot into a new role or even into a new industry. I encourage them to think about what they want and what stepping stones are needed to get them there. I’ve seen people in a complete panic because they’re frightened of the technology WFH [working from home] has foisted on them. But equally I’ve seen those who have looked on it as a challenge and seriously upskilled their technology capabilities online during lockdown. Others have rediscovered their self-confidence because they’ve been away from an undermining boss or a difficult colleague and are now considering a career move as a result.

“Overall, I think Covid has changed rather than killed career progression.”

Kieran McKeown, managing director of Matrix Recruitment, says Covid has turned hiring on its head. “It hasn’t just affected how we interview and recruit new candidates, it has also led to a reversal in the make-up of the jobs sector,” he says.  “This time last year our focus was on finding skilled candidates for the many jobs our clients had to offer. Now we are dealing with more skilled candidates than ever before with fewer permanent roles to fill. With so many sectors impacted, we are seeing a contraction in the availability and creation of new jobs.

“And, while not a scientific assessment of the situation, anecdotal evidence suggests that those who have started new jobs, or have only recently joined the workforce, are finding it most challenging when it comes to career progression, particularly if they are working from home. A new employee may have to work twice as hard just to get noticed.”

With promotion stalled in many organisations due to financial constraints and collapsed markets, McKeown says companies need to get creative about recognising people’s efforts. “They might need to consider alternatives to financial rewards such as a more blended work set-up for employees, or maybe additional paid leave or increased pension contributions,” he says. “Despite what seems on the surface to be a universally gloomy outlook, we are still seeing steady recruitment in sectors such as pharma, research & development, food services and the traditional manufacturing sector in Ireland.  These have become the star performers and are the areas in which we see the greatest opportunity for career progression.”

However, job seekers with itchy feet should proceed with caution and avoid overusing online recruitment platforms, says Prof Nikos Bozionelos, an expert in international human resources management at France’s Emlyon business school. His recently completed research with a group of internationally employed professionals and job seekers found that using social media platforms excessively to job search is likely to lead to fewer offers than might be expected.

“The findings suggest that people who prioritise professional social media platforms like LinkedIn as a way to find a job tend to spend disproportionate amounts of time searching and sending out applications and are less selective in the jobs they choose to enquire about or apply for,” he says. “As a consequence, there is less chance of identifying those jobs that suit them best and they have less time to prepare their application well to maximise their chances of succeeding.”

The research was conducted through online employment surveys and interviews with experienced hiring and recruitment managers. While recruiters saw having a profile as important, and admitted to looking at people’s entries even if they had not applied for a job through the platform, almost 80 per cent of them believe social networking sites are more useful for making contacts than for getting a job.

“It appears that job seekers should look at the social media platform as a way to network with as many relevant people as possible,” Prof Bozionelos says. “Putting a name to a face and having a general conversation increases the chances of being informed about or applying for a job that fits their skills, experience and desires. This is more effective than just applying for any job that is loosely related to their desires or skills. The findings suggest that sites such as LinkedIn are more beneficial when they are used as personal branding and self-promotion tools, as opposed to job advert sites.”