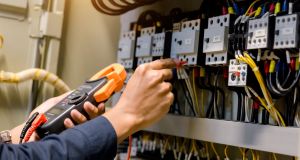 The Connect trade union has warned employers of “war” if they fail to honour agreements on pay and pensions in construction, mechanical and electrical sectors.

This follows the decision of the High Court to find key elements of industrial relations legislation to be unconstitutional.

Describing Connect as Ireland’s largest craft and construction trade union, he said: “Employers are now on notice that we will consider an attack on any one sector or worker in that sector an attack on all.”

Mr Kavanagh said the executive of the union will meet on Thursday to consider developments and develop a strategy “which will include the potential for a national ballot for protective action”.

“Connect trade union has written to all stakeholders in each of the three sectors involved, stating that all contractors and client sites throughout Ireland must continue to honour existing agreements. We have clearly warned them that if this does not happen it will end the industrial peace, which benefits us all at this time, and instead result in the beginning of an industrial war we are confident of winning.”

Earlier the Unite trade union said the Government must seek a stay on the High Court decision pending an appeal to the Supreme Court.

On Tuesday the High Court found the Minister for Business and Innovation, Heather Humphreys, had acted outside her powers in purporting to make a sectoral employment order in the electrical industry.

Unite trade union regional officer Tom Fitzgerald maintained the ruling “posed a significant threat to Ireland’s economic recovery”. He said Unite “would use all means at its disposal to protect and advance workers’ interests”.

1 Big Four told to outline plans for audit split in UK by October
2 Mortgage arrears: Prevention is definitely better than cure
3 Can we finally say farewell to the scourge of hot-desking?
4 Ballymore acquires London shopping centre for €83m
5 Irish pharma sector warns of protectionism as US corners supply
6 How to further divide the economy using the wage subsidy
7 US stocks climb after huge rally in Chinese shares
8 Chris Johns: Economic self-harm is the root of populism
9 Why are markets booming when a crash is on the way?
10 Stocktake: Playing poker with the day traders
Real news has value SUBSCRIBE