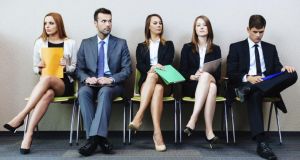 Recruiters and managers are so faceist that the good-looking have been found to earn some 10 per cent more than the bad-looking. File photograph: Stockphoto/Getty

In 2016, Karen O’Reilly set up the recruitment company Employmum to “specialise in flexible, part-time, remote, flexihours and everything in between”. Her target market then was mainly women looking to enter or rejoin the workforce and O’Reilly was driven to start the company by her own experience of trying to find a job.

Despite being an accountant with more than 20 years’ professional experience abroad, she found it impossible to find a job that allowed her to combine work with raising a family when she came back to Ireland.

“I assumed I’d have no trouble finding work that could also accommodate my family responsibilities. I was wrong,” she says.

Five years on and O’Reilly has added a second strand to her business: Employflex, which aims to help those of all genders find flexible working hours. That said, female job seekers remain her single biggest client group.

Blind recruitment has yet to be adopted by most Irish companies

“Attracting and retaining women continues to be a challenge in the workplace because companies still don’t ‘get it’ when it comes to implementing policies that encourage a better gender balance,” she says.

“We are seeing a slow but steady increase in inquiries from companies keen to do something about it, especially in the traditionally male-dominated areas of Stem and construction. However, it’s not that easy to do in professional roles because the pool of women simply isn’t there to draw from.

“It’s relatively easy to find women for support roles such as HR. Much harder to find them for engineering roles.”

O’Reilly has a number of suggestions to help companies put themselves on the radar of female job hunters, and returnships are top of her list. These are like internships but aimed at those with work experience who have taken time out from their careers.

“Returnships are very appealing to women who might have taken a career break to look after the kids and now want to re-enter the workplace but are getting the door slammed in their faces due to the ‘gap’ in their CV,” O’Reilly says. “A returnship can genuinely open the door to this candidate and, via coaching, training and mentoring, can bring them back to the level they were at before they took time out.”

Flexible working arrangements are not just female friendly, they are family friendly, O’Reilly says, whatever the family’s composition and the responsibilities involved.

O’Reilly says more companies need to look at introducing flexible and remote working policies that can accommodate the needs of parents and those caring for family members.

“Companies may need to review their website and social media feeds to look at the gender balance messages they are communicating,” she says. “They may also need to work on their job specs to make them more attractive to all gender groups.

“Sometimes, people are so engrossed in their own work bubble that they fail to see that the jargon and terminology of their job descriptions can be very intimidating.

“Remember also that women will generally not apply for a job unless they can tick everything on the job spec whereas men will. So, if a company’s job spec is three pages long then the chances are they won’t get many female applicants.

“We see this every day with women talking themselves out of roles that they are absolutely 100 per cent capable of doing. It’s called the confidence gap. In practical terms, Textio Hire is an app that companies can use to eliminate or reduce known words that deter women from applying.”

Removing unconscious bias in the recruitment process is also an important way of improving workforce diversity. In general, organisations don’t set out to operate with bias when hiring, but it can creep in unintentionally because people are people and the social stereotypes they are familiar with can have an influence on their hiring decisions.

Unconscious bias can be tackled with specific training and awareness-raising exercises while blind recruitment, where only relevant experience and no personal details are shown to recruiters, can also help eliminate bias.

Blind recruitment has yet to be adopted by most Irish companies. The 2018 Hay’s Ireland Diversity & Inclusion report indicates that only about 20 per cent of companies here have introduced name-blind recruitment.

The research also found that 72 per cent of job candidates would only consider applying to an organisation if it has a public commitment to diversity and inclusion.

To increase an organisation’s visibility when it comes to making people aware of its commitment to gender diversity O’Reilly suggests adding role model blogs to the company’s website and highlighting ways in it is showing its support for the diversity and inclusion agenda.

“Specifically, in relation to attracting women I’d suggest that companies look at their talent pipeline,” she says. “Is there anything they can do at grassroots level that could increase the participation of females in the future? For example, going out to colleges and speaking about the advantages and benefits of joining their company.

“In general, ensure you have a robust maternity charter, that you encourage career progression for everyone – even those who have opted for a more flexible work plan – and that you treat everyone the same. Remember, diversity is being asked to the party. Inclusion is being asked to dance.”