Let’s be bold and dress for comfort at work 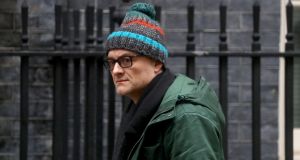 The other week at Heathrow I picked up a free copy of GQ men’s magazine and spent several cheering minutes thumbing through the 27 pages devoted to its annual list of the 50 best-dressed men.

After I had read about the casually elegant Prince Harry and the “living, breathing fashion deity” that is apparently Keanu Reeves, I discovered there was an even better list: 2020s worst-dressed men.

GQ loathed Mark Zuckerberg’s suits. It despaired of Donald Trump’s waistcoats. David Solomon, the Goldman Sachs boss and part-time DJ, may have relaxed his bank’s dress code last year, but his dance-floor garb of baseball caps and T-shirts was still deemed a bit too “grandad at the disco”.

The man who offended the magazine most horribly came as a shock. It was Dominic Cummings, the maverick No 10 aide. His crimes against style were judged to be his “nondescript” sports hoodies, his ghastly fleece vests and his general tendency to “dress like an unlicensed cab driver”.

I realise the people at GQ are experts at this sort of thing and I am not. But it strikes me that their verdict on Cummings reveals a shaky grasp of the modern working man’s dress needs. More baffling still for those of us inclined to own more Gap than Gucci, it is hard to see why his fashion felonies are worse than some who made it to the best-dressed list.

The judges said, understandably, that his baggy, shapeless jeans “deserve an Asbo”. Yet No 16 on the best-dressed list is the rapper A$AP Rocky, who is pictured in even baggier, weirder jeans but somehow still qualifies as “one of the men who are getting it right”.

A similar mystery surrounds Cummings’s feet. GQ shows them in trainers that do not seem dramatically worse than those worn by David Beckham (No 4 on the best-dressed list) or LeBron James (43).

All three men are part of an admirable trend towards comfort that has helped to double global trainer sales since 2013 and loosen tedious dress rules from Wall Street to Westminster, not only for men.

I cheered Emma Thompson when the actor wore trainers to Buckingham Palace to collect her damehood in 2018. I was sorry to see Jess Phillips exit the race to lead Britain’s Labour Party. The backbencher wears trainers in the House of Commons and had promised to wear jeans in No 10 if she made it there.

I thought of her the other morning as I was fumbling around in a lather of indecision about what to wear on stage at a company event that was going to be broadcast live to all staff. Knowing the men beside me would be armed in suits and ties, I went for the proportionate response of a pencil skirt and heels.

Tottering up to the stage a few hours later, I thought of how a braver woman would have turned up in trainers and jeans, which reminds me of another problem with the GQ Cummings ruling. It demeans an element of dress sense that today’s working man might find useful.

Office dress codes may be loosening in cities such as London, but Cummings’s unbuttoned wardrobe remains a source of wonder in a place such as Downing Street.

This suggests that, consciously or not, he knows the power of what researchers call the “red sneakers effect”: our tendency to think that people who behave in a slightly unconventional way are more competent than conformists.

The name comes from a study by Harvard academics who looked at how people felt about a professor teaching a business seminar in red Converse trainers, or contestants in a business competition who used their own PowerPoint layouts instead of the official template. The paper concluded that, contrary to conventional wisdom, sticking out in a crowd does not automatically cause problems.

Instead, if someone is confident enough to wear an old T-shirt in a building full of suits, we are inclined to admire them because we think they have the power or ability to risk it.

Cummings appears to have absorbed this lesson, and for that alone I like to think that next year, GQ will give him a break. – Copyright The Financial Times Limited 2020