Nostalgia for empire is implicit in British exceptionalism 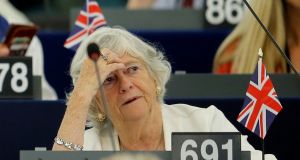 It is extraordinary for a British politician to stand up in the European Parliament and say, “there is a pattern consistent throughout history of oppressed people turning on the oppressors - slaves against their owners, the peasantry against the feudal barons, colonies against their empires, and that is why Britain is leaving”.

To complain about being enslaved, when your country did so much to promote the slave trade, or to compare yourself to a colony leaving an empire when you had the biggest empire of all, goes beyond irony .

But Brexit Party MEP Ann Widdecombe has claimed that she was simply using an analogy in comparing Britain’s EU membership to slavery.

The analogy is not remotely comparable.

Cities like Bristol, Liverpool and Glasgow got rich trading in slaves to North America and Britain’s Caribbean colonies, a practice which went on with impunity for three centuries. The British slave trade remains at the root of the issue of race - America’s original sin.

Irish people need no reminding of the realities of the British Empire. Neither do the peoples of Kenya, Zimbabwe, South Africa, Afghanistan, Pakistan, Burma or India to name but a few. The centenary this year of the Amritsar massacre in which British-led troops killed at least 379 unarmed civilians, came and went without an apology which was sought by Indians from the British government.

Most of us have sought to move on from the “800 years of oppression” narrative and recognise a new era of British-Irish relations. During her State visit in 2011, Queen Elizabeth II gave a masterclass in understatement when she described relations past between the two islands as “not being entirely benign - with the benefit of historical hindsight we can all see things which we would wish had been done differently or not at all”.

The queen correctly identified the importance of “being able to bow to the past, but not be bound by it” a sentiment at the time which summed up the willingness of so many on all sides to move on from the past.

Warm sentiments are no substitute for a hard-headed, unflinching appraisal of the past which the British seem to be incapable of doing.

It would be easy to dismiss Widdecombe’s ridiculous comments, but this is to ignore that historical ignorance is at the heart of the Brexit disaster.

She is not the first Tory politician to exhibit a worrying propensity to whitewash Britain’s past. The trade secretary and ardent Brexiteer Liam Fox declared three years ago: “The United Kingdom is one of the few countries in the European Union that does not need to bury its 20th century history”.

His fellow Brexiteer Michael Gove, as education secretary, proposed a history curriculum that was an exercise in British self-congratulation when he sought a “clear narrative of British progress with a proper emphasis on heroes and heroines from our past”. He only backed down when his proposals were derided by teachers and historians.

Nostalgia for empire is never explicit in the Brexiteer worldview, but it is implicit in the belief of British exceptionalism.

Other countries have unflinchingly sought to confront the truth about their past. Germany’s behaviour since 1945 has been an act of atonement for the monstrous excesses of the Nazis. French president Emmanuel Macron apologised last year for state torture carried out during the Algerian war in the 1960s and promised to open up the archives. Closer to home, we, as a society, have exposed the past sins of the Catholic Church and are better for it.

Yet, the same is not true in Britain. Historian Sir Hew Strachan told The Irish Times earlier this year that in Britain there is a “lack of historical awareness which is extraordinary when other countries and other people have a much greater sense of their own past”.

This was particularly true, he stated, in relation to Ireland. Most British politicians haven’t bothered to learn about Irish history. Therefore they know nothing about the significance of the Border, how it came about and why it is such a visceral issue in the Irish consciousness. Thus, they had no answer when the Border became the stumbling block to the implementation of the withdrawal agreement.

You cannot ignore the past when it is so important to understanding the present. The British have already found out the hard way the truth of that well-known observation from the philosopher George Santayana that “those who cannot remember the past are condemned to repeat it.”

1 Shane Ross: ‘I lost a friendship with Mattie McGrath completely. He got totally personal’
2 Coronavirus: Everything you need to know about Covid-19
3 ‘F**king n***er.’ A racist incident on Bachelors Walk
4 Murder in a crowded house: The full story of the Patricia O’Connor trial
5 Storm Jorge: Power outages, fallen trees expected as ‘exremely strong wind’ to hit Ireland
Real news has value SUBSCRIBE