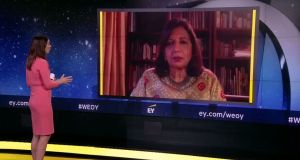 The year’s ceremony is the first to be held online as the formal event, usually held in Monaco, had to be cancelled as a result of lockdown restrictions imposed across the globe. Pictured on screen is Dr Kiran Mazumdar-Shaw.

Dr Kiran Mazumdar-Shaw, the executive chairwoman of one of India’s largest biopharmaceutical companies, has been named EY World Entrepreneur of the Year for 2020.

Dr Mazumdar-Shaw, the executive charwoman of Biocon Ltd, beat 46 country winners, including the Ireland Entrepreneur of the Year, at a ceremony held online. The planned formal gala event, due to be held in Monaco, had to be cancelled as a result of lockdown restrictions.

Dr Mazumdar-Shaw founded Biocon in 1978 with $500 (€440) and the company has since become one of the largest employers in its region with more than 11,000 staff. Banks originally declined to lend her money and she ultimately created “a model that was based on revenues and profits, rather than venture capital”.

Dr Mazumdar-Shaw has been recognised globally, appearing on the Forbes 100 most powerful women list and Time Magazine’s 100 most influential people in the world list.

Under her leadership, Biocon has evolved from manufacturing pharmaceuticals such as statins and immunosuppressants to discovering, developing and producing biologics to treat chronic diseases such as diabetes.

Biocon has been consistently ranked as one of the highest research and development spenders in India. The company is leading efforts to provide affordable insulin for patients around the world by producing insulin at less than 10c per day.

Richard Kennedy, chief executive of agri-tech business Devenish, represented Ireland at this year’s awards, having won the Irish equivalent in 2019.

The event, now in its 20th year, was last year won by American tech veteran Brad Keywell for his role in founding Uptake Technologies, a Chicago-headquartered predictive analytics software company. He was previously a co-founder of Groupon.

The overall winner was chosen by an independent judging panel, with the award given on the basis of a number of factors including entrepreneurial spirit, financial performance and innovation.

1 Belgium helps Ireland to a Brexit boon
2 ‘My rent here is so low it’s a joke’
3 Can Grafton Street stop the flood of closures?
4 This charming man: how Paschal Donohoe won the Eurogroup presidency
5 AIB to compensate another 1,100 tracker mortgage holders
6 Goodbody’s planned €155m sale to Bank of China falls through
7 Big Four told to outline plans for audit split in UK by October
8 Pharmaceutical industry signals it won’t extend drugs agreement
9 How to . . . move (almost) everything to your new phone
10 New Powerscourt Springs hotel to open in defiance of virus gloom
Real news has value SUBSCRIBE