All Iseq executive directors appointed over 18-month period were men

Rate of female board appointees has slowed down, says Balance for Better Business group 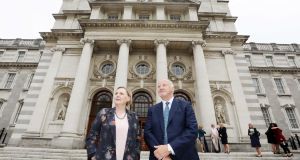 Balance for Better Business co-chairs Brid Horan and Gary Kennedy. The organisation’s report found that a target for all publicly quoted companies to have at least one woman on their senior leadership team by the end of 2020 will be missed. File photograph: Leah Farrell/RollingNews.ie

All executive director appointments at publicly quoted companies in the Republic over the 18 months to September 1st were filled by men, while the rate at which women are being appointed to any position on company boards has slowed down, a new report shows.

Tánaiste and Minister for Enterprise Leo Varadkar, who set up the group in 2018, will launch its latest report by webinar today.

The Republic is now ranked 13th in the EU, up from 17th, when it comes to the representation of women on publicly quoted company boards. The 20 largest companies listed on the Iseq, known as the Iseq 20 companies, have also reached the group’s end-of-2021 target of 27 per cent female representation on their boards a year ahead of target.

Overall, some 22.4 per cent of listed company directors are female, compared to 19.1 per cent a year earlier and just 14 per cent in 2018, while five boards have reached or exceeded the ultimate 40 per cent balance target: AIB, CRH, Bank of Ireland, Ryanair and CPL.

The group issued a call for Irish companies “to urgently address the serious gender imbalance” that persists at senior level.

Greencore chairman Gary Kennedy, who co-chairs Balance for Better Business with Brid Horan, said it was “not insignificant” that Iseq 20 companies had met the target set for them, but that there was “still a lot of work to be done”.

“Averages hide a lot of things,” Mr Kennedy said. “The appointment rate of female directors has fallen in the last 12 months and that is not a positive indicator.”

Only 27 per cent of all new board appointments in the year to September 1st were female, a significant reduction on the 50 per cent rate seen in March-September 2019, with the result that companies will likely fail to meet the 2023 targets set by the group. The trend has been “particularly acute” at executive director level where a run of 13 roles were filled without a single female appointment.

Eight all-male boards were listed on the Euronext Dublin as of September 1st, although one of these companies – Open Orphan – has since appointed a female director. The seven remaining are Applegreen, Donegal Investment Group, Great Western Mining Corp, Mincon Group, Ormonde Mining, Ovoca Bio and Providence Resources. Five of these companies appointed new male directors during the period.

“The excuses are the same old excuses,” Mr Kennedy said. “You ask yourself, are they just refusing to take the medicine?”

Rather than citing Covid-19 as an excuse for regression or stalled progress, companies should use the crisis as a catalyst for progress, he said, with the year providing “an opportunity to really embrace” remote working, flexible working and other measures known to improve gender balance and diversity at senior level.

Ms Horan, who is chairwoman of Nephin Energy, said unless the issues were tackled, many companies would fall “spectacularly short” of the voluntary targets. “More prescriptive steps may be needed to achieve balance, as has happened in several other countries.”

The group’s third report also sets an end-2023 target of 40 per cent female representation in key executive roles at leading multinationals with significant operations in the State. The current rate is 30 per cent.

The Irish Times asked the seven companies for comment on why they have no women on their boards and what they intend to do about it.

Ovoca Bio did not return a request for comment and Applegreen did not do so in time for print publication, but the petrol station chain operator said it was “fully supportive” of efforts to improve diversity and inclusion in Irish business and “fully committed” to rectifying the gender imbalance on its board. Mincon and Donegal Investment Group said they had “no comment” to make on the matter.

A spokesman for Providence said addressing the lack of diversity on its board “will be a priority which we expect to progress during 2021”.

Great Western said it was looking to add a female non-executive director to its board with a view to making an appointment by its next AGM in summer 2021.

“It is a very small company and the new executive management has only been in place for the past 12 months, so a work in progress, but very much on the board’s agenda,” a spokesman added.

Ormonde Mining chief operating officer Fraser Gardiner said the board was “cognisant of the lack of diversity” in recent appointments, but that it considers this to be a “short term position pending corporate developments, with a target of 33 per cent female directors by 2023”.

EasyGo overtakes ESB as largest provider of charge points for electric vehicles 06:44
Chinese investments, AIB and Irish life team up and who foots the bill? 06:46
Fresh Covid onslaught sends consumer sentiment down 06:37
AIB and Irish Life in advanced talks on joint venture 06:00
Who is going to pay for costs of working from home? 06:00