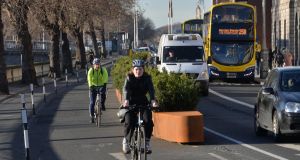 There were a 3% increase in cyclists in Dublin city during off-peak hours in December 2020 compared with December 2019. Photograph: Alan Betson

Traffic on Irish roads is 45 per cent below normal since the introduction of tougher Level 5 restrictions after Christmas.

Figures from the Central Statistics Office (CSO) show car traffic volumes increased consistently since the beginning of November, gathering pace in the early weeks of December with the easing of restrictions.

However, the figures show they began to decline again during the Christmas holiday period and more so after Christmas when the Government reintroduced Level 5 restrictions in response to rising infection rates.

“Obviously, this decline in road traffic volumes coincides with the holiday period and the return to Level 5 restrictions from December 24th,” the CSO said.

The number of journeys by bus and rail are 78.3 per cent lower than pre-Covid-19 levels.

The figures also highlight an increase of 3 per cent in the volume of cyclists in Dublin city during off-peak hours in December 2020 compared to December 2019.

The CSO’s Noreen Dorgan said: “The number of passenger journeys on public transport has dropped dramatically since the start of the Covid-19 crisis with journeys by rail most severely affected.”

“Despite some recovery in the lead-up to Christmas, the holiday period and the return to Level 5 restrictions has seen public transport volumes fall back to just over one-fifth (21.7 per cent) of volumes seen in early March.