Airline requests authorisation to commence selling flights to US from Manchester 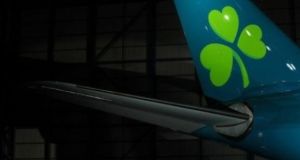 Aer Lingus plans to start selling tickets for direct flights between Britain and the United States from Friday.

The Irish carrier has requested authorisation from the US Department of Transportation to “promote, advertise and sell” flights to passengers by close of business on Thursday with a view to making tickets available to buy on the following day. The move comes after unions representing pilots said they had no objection to the plan.

The Air Line Pilots’ Association (ALPA), which represents nearly 60,000 pilots globally, gave its blessing for the new operation late last month. It approved the application on the grounds that pilots on the routes would be represented by the Irish Air Line Pilots’ Association (IALPA), and because employees’ terms and conditions would be governed by a collectively-bargained labour agreement.

The airline’s new UK subsidiary, which is registered in Belfast, formally applied to the US for a foreign carrier’s permit allowing it to fly there from Britain in early December.

Aer Lingus (UK) Ltd intends to fly from Manchester to Boston, New York and Orlando, Florida, using four Airbus jets, two of which are normally based in the Republic. The airline also plans on using two new Airbus A321 long-range jets, originally earmarked for the Republic, on the proposed Manchester-US routes.

The airline is looking to cash in on a gap in the market left by travel company Thomas Cook’s collapse in September 2019. In supporting documentation for a permit, the operator of Orlando International Airport backed the Aer Lingus application, estimating the economic impact of Thomas Cook’s bankruptcy locally was at least $141 million (€116m).

“Increased seat capacity between Manchester and Orlando International Airport would be most welcomed and beneficial to our community tourism recovery efforts,” it said.

The roll-out of transatlantic services from Manchester comes as Aer Lingus’ parent, International Airlines Group (IAG), which also owns British Airways and Iberia in Spain, last week rejigged its board to ensure its carriers continued to comply with European Union ownership and control rules following Brexit. The plans included the implementation of a national ownership structure for the Irish airline.

It also follows approval for Aer Lingus to join the Oneworld transatlantic joint venture operated by IAG and American Airlines, which its members claim will lead to up to $96 million in annual consumer benefits.

A motion filed by the joint venture to the department of transportation last year indicated a number of potential benefits that would occur with the addition of Aer Lingus. These included lower fares and more connectivity options for travellers due to increased codesharing.