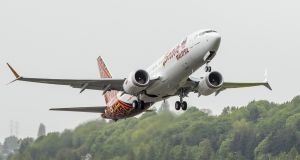 The 737 Max is the latest model of the single aisle Boeing craft used on mainly short-haul routes around the world and is predicted to become one of the biggest-selling planes produced by the US aerospace giant.

Avolon delivered the craft to the Kuala Lumpur, Malaysia-based Malindo at a ceremony at Boeing’s centre in Seattle, Oregon in the northwestern US. The airline is the first to have taken commercial delivery of the model.

The Max is designed to be more fuel efficient and to carry larger numbers of passengers over longer distances. Avolon intends to deliver 60 of the craft between now and 2021.

Production of the craft hit a snag last week when a flaw was discovered in a part in a small number of engines. Regulators have since cleared the craft to fly and the source of the problem has been tracked down.

1 Google completes purchase of Treasury Building for €120m
2 Varadkar resigns amid warning impasse will hit the economy
3 Garda mobile contract win causes concern over Eir’s use of Huawei kit
4 How do you know if you are wealthy? It’s not straightforward
5 A maverick taking on the Irish whiskey establishment
6 High time: Netherlands moves to clean up absurd cannabis policy
7 Nineteen staff made redundant by Nama share €1m
8 Communicorp says ban on Currency journalists strictly business
9 Appeals board grants planning for 354 Greystones homes
10 Help, I’ve no PRSI stamps – can I still get a pension?
Real news has value SUBSCRIBE