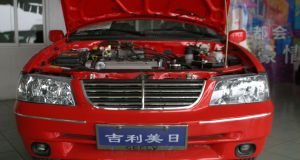 A Geely in the companies’ showroom in Beijing: group secured a deal with Proton. Photograph: Katharina Hesse

Spokespeople for DRB-Hicom could not immediately be reached for comment after office hours in Kuala Lumpur. The group earlier asked for trading in its shares to be suspended pending an announcement.

Other potential bidders have included PSA, the Paris-based maker of Peugeot and Citroen cars, its domestic rival Renault and Japan’s Suzuki Motor Corp.

PSA, whose chief executive Carlos Tavares had said Proton would be a good fit, did not immediately return calls and messages seeking comment.

Proton re-badges cars from foreign manufacturers to sell in the local market, but its quality has declined in recent years. The company has two Malaysian plants with an annual capacity of 400,000 cars, currently running far below maximum output.

An earlier attempt in 2007 to woo new partners for Proton foundered on the Malaysian government’s refusal to allow foreign bidders to acquire control.

Geely’s investment would help Proton grow its sales overseas and recover some of the global presence it has lost in recent years, people familiar with the bidding process told Reuters in February.

By offering some of its own technology, Geely hopes to lift Proton’s sales in right hand-drive markets including Malaysia, the United Kingdom, India and Australia, they said.

The success of midsize Geely models such as the GC9 sedan and Boyue SUV helped to grow the brand’s China sales by 50 per cent last year to 765,851 vehicles.