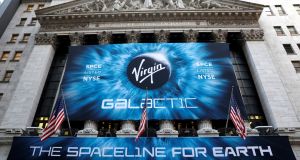 Shares of Virgin Galactic Holdings fell as much as 24 per cent in early Thursday trading, the most ever, after downgrades from the two top analysts

Shares of Virgin Galactic Holdings fell as much as 24 per cent in early Thursday trading, the most ever, after downgrades from the two top analysts among the three that cover the stock, Morgan Stanley’s Adam Jonas and Credit Suisse’s Robert Spingarn.

Both lowered their recommendations to the equivalent of neutral from buy.

Richard Branson’s space transport company has been popular among hedge funds and other investors who believe it will establish a new space-tourism industry. Shares had soared about 150 per cent so far this year, even with a post-earnings dip earlier this week.

Morgan Stanley’s Jonas said he was “waiting for fundamentals to catch up.” He cut his rating to equal-weight, though he lifted his target to $30 (€27) from $22.

“Management’s mission to be a sustainable and highly successful/profitable commercial space-line will require a confluence of events to come together over many years and in a potentially [if not likely] non-linear manner,” Jonas wrote in a note.

While the company’s story is still “compelling”, Credit Suisse’s Spingarn cut his rating to neutral on valuation, as he can no longer recommend the shares after this year’s rally. He also raised his price target, to $25 from $15. – Bloomberg