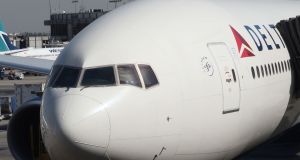 Delta will seek to reduce its carbon footprint by a series of measured including decreasing the use of jet fuel and increasing efficiency. Photograph: Daniel Slim/AFP

Delta announced an ambitious plan on Friday to become the first US airline to go carbon neutral, committing $1 billion (€923 million) over the next 10 years to mitigate all emissions from its global business.

The move by Delta will put pressure on other airlines to follow suit at a time when the United Nations is warning that aircraft emissions of carbon dioxide will triple by 2050.

Carbon dioxide emitted by airlines increased by 32 per cent from 2013 to 2018, according to a study by the International Council on Clean Transportation. A Guardian analysis found long-haul flights generate more carbon emissions than the average person in dozens of countries around the world produces in a year.

“There’s no challenge we face that is in greater need of innovation than environmental sustainability, and we know there is no single solution. We are digging deep into the issues, examining every corner of our business, engaging experts, building coalitions, fostering partnerships and driving innovation,” said Ed Bastian, Delta’s chief executive.

Delta outlined a series of efforts it will use to reach its goal.

The company will seek to reduce its carbon footprint by decreasing the use of jet fuel and increasing efficiency.

Delta will seek to offset its carbon emissions by investing in carbon removal programmes in forestry, wetland restoration, grassland conservation, marine and soil capture and other negative emissions technologies.

The company will seek coalitions with its employees, suppliers, global partners, customers, industry colleagues, investors and other stakeholders to reduce their carbon footprint.

Delta is the latest big company in a heavily polluting industry to announce plans to go carbon neutral. This week energy company BP announced plans to reduce its carbon footprint to net zero by 2050, which has been met with scepticism by climate activists. – Guardian News and Media 2020

1 IMF chief says pandemic will unleash worst recession since Great Depression
2 Irish Times cuts senior manager and editor pay by up to 30%
3 Lockdown exit: How can Irish economy reopen without big health risks?
4 Ireland’s financial reputation: why this time it is different
5 Debenhams to shut stores in Republic with loss of 1,000 jobs
6 TCD to spend €200,000 on Chinese student recruitment drive
7 Deliveroo branches into grocery deliveries in Ireland
8 Bank of England to directly finance UK’s Covid-19 spending
9 Property market has not felt full impact of Covid-19, warns Sherry FitzGerald
10 Post-Covid, welfare of majority not the privileged is crucial
Real news has value SUBSCRIBE