Volkswagen executive pleads not guilty to fraud and conspiracy 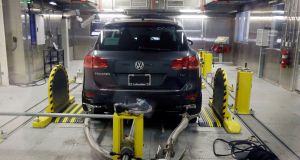 Volkswagen agreed last month to pay $4.3 billion in penalties and plead guilty to using false statements to import cars into the US. Photograph: Carlos Osorio/AP

A Volkswagen AG compliance executive arrested in the US over the company’s emissions-cheating scandal pleaded not guilty to charges of fraud and conspiracy as five others remain outside prosecutors’ reach.

Oliver Schmidt, a German national, was arrested last month in the US while on vacation in Florida.

The five other executives based in Germany, also indicted by the US for their alleged roles in the scheme, have stayed home where they are protected from extradition.

Mr Schmidt, the company’s liaison with US regulators, stood silently in a red prison jumpsuit while handcuffed as US magistrate Judge Steven Whalen entered the plea in Detroit.

Mr Schmidt’s lawyer, David DuMouchel, told reporters he will seek bond for his client, who has been in federal custody since his January arrest. Mr DuMouchel declined to comment on whether Mr Schmidt will co-operate with prosecutors.

The criminal plea is part of the ballooning bill that has followed the carmaker’s September 2015 admission that about 11 million diesel cars worldwide were outfitted with so-called defeat devices, embedded algorithms used to game emissions tests.

The total cost of penalties, buybacks and fixes in North America could exceed $23 billion as Volkswagen tries to overcome the biggest scandal in modern automotive history.

The company and its executives are still under investigation in Germany and it faces investor lawsuits in the US and at home. Last month German prosecutors added former chief executive officer Martin Winterkorn to the list of targets.

Schmidt was indicted along with Heinz-Jakob Neusser, former head of engine development who was suspended in 2015; Richard Dorenkamp, who led the failed effort to design a diesel engine that would meet the tougher emissions standards the US adopted for 2007; Jens Hadler, who led engine development from 2007 to 2011; Bernd Gottweis, who was responsible for quality management from 2007 to 2014; and Jürgen Peter, a VW liaison with US regulators during the months when they were growing more suspicious.

The US claims Volkswagen and individual defendants were part of a scheme begun in 2006 to fool US regulators and car buyers into believing the company’s so-called clean diesel engines could meet federal emissions standards.

VW sought to sell more diesel cars in the US as tougher emissions rules were about to be adopted in 2007.

When VW couldn’t design an engine that met the new standards, company executives authorised the creation of a so-called defeat device – software that detected when the vehicle was undergoing testing and switched to more effective emissions controls, US prosecutors said.

US and California regulators pressed VW for an explanation and the company’s executives stonewalled the agencies, prosecutors said. Mr Schmidt, along with Mr Neusser, Mr Gottweiss and Mr Peter, “pursued a strategy of concealing the defeat device in responding to questions from US regulators, while appearing to co-operate,” federal prosecutors said in court papers last month.

“This is a very paper-intense matter,” Mr DuMouchel said. Judge Whalen didn’t rule on the transfer.

The judge, noting that he doesn’t have the authority to assign a defendant to a particular prison, said he is recommending that Mr Schmidt be sent to Milan.

Mr DuMouchel also asked Judge Whalen that Mr Schmidt be allowed to receive medication for shingles, an often painful viral infection, and that he receive his prescription eyeglasses. He has had neither so far during his incarceration.

Mr DuMouchel said Mr Schmidt has been “suffering from shingles the last few months.” The judge granted both requests.