‘Travel is not the bogeyman’ when it comes to Covid-19, Ryanair chief says 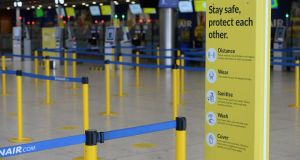 Ryanair is “absolutely not” putting its business interests ahead of public health concerns and “travel is not the bogeyman” when it comes to the spread of Covid-19, a top executive at the airline has said .

The chief executive of Ryanair Dac, Eddie Wilson also insisted the airline was moving expeditiously to process refunds for millions of its customers and said the vast majority of refunds totaling €750m would be processed by the end of this month.

However, Mr Wilson refuse to say how much of that €750m would be returned to customers in cash and how much would come in the form of vouchers or rebooked flights.

Mr Wilson once again castigated the Government for what he said was its “half baked quarantine” and he called for travel restrictions to be lifted for countries across the EU with, he suggested, the exception of Sweden.

He denied that he was making the call to protect Ryanair and pointed out that flights to and from the Island of Ireland amounted to around 8 per cent of its total business.

Instead he expressed concern for Irish tourism operators who, he warned, were facing bankruptcy unless visitors from overseas were allowed to travel to the country unimpeded by any Covid-19 related restrictions.

“Saying we are closed for business with this half-baked quarantine is not going to work,” Mr Wilson told RTÉ Radio One’s The Business with Richard Curran..

He acknowledged that the authorities and the country at large had “done a very good job” in bringing the spread of Covid-19 but said now was the time “to get back to business.”

Mr Wilson suggested that Ryanai flights in July and August were “fully booked” but when pressed as to whether they were recent bookings he admitted many people booked flights for the summer season “a lot earlier in the holiday curve” with most new bookings being made for the “shoulder season” autumn months.

He said he expected around 90 per cent of the customers impacted by the mass cancellations of recent months to have been accommodated in some form by the end of July with €750m worth of tickets processed “in a combination of flight changes, vouchers and cash refunds”.

When asked how much of the €750m would be issued in the cash refunds which all passengers are legally entitled to he said “we don’t break that out.”

He was also asked how air travel should be recommenced and said that “at a minimum Europe should be open” although he conceded that there might be exceptions like Sweden.

He suggested that other countries across the EU had contained the spread of the virus. “The rest of Europe is back to normal,” Mr Wilson said and he said there had been “no flare-ups” although he added that there were concerns around Lisbon and area in the eastern part of Catalonia.

He dismissed the “idea that travel is the bogeyman” and said there was “evidence” that people who were travelling abroad were doing so responsibly, wearing face masks and eating outdoors “and taking sensible precautions” although he did not provide the source of the evidence he referred to.

Mr Wilson’s calls for restrictions on international travel are unlikely to heeded by the authorities.

On Monday a green list of countries which the Government deems to be safe to travel is likely to be published although official advice against non-essential travel outside of the country will remain in place.

The list is not likely to be long and destinations which are popular amongst Irish tourists in the summer months are not likely to feature.

Higher coronavirus infection rates on Spain, Portugal and France mean they are not likely to be included on the list of safe countries for unrestricted travel, according to a leading virologist.

Dr Cillian De Gascun, chair of the expert advisory group to NPHET, said the typical destinations for Irish holidaymakers were “not at a safe level” right now.

A closely watched metric on the rate of infections in countries, which is collated by the European Centre for Disease Prevention and Control, shows that Spain, France, Portugal and Croatia have considerably higher numbers of coronavirus cases than Ireland.

1 Am I crazy to consider switching to an Ulster Bank mortgage?
2 PTSB plays down Ulster Bank talk as it sells €1.4bn of loans
3 Irish tech company Asavie acquired by Nasdaq-listed Akamai
4 Up or down – how much is your Local Property Tax this year?
5 Asian shares slip as surging Covid cases weigh on global economy
6 How much state pension will I get next year?
7 Brexit to curb services trade with UK, accountants group warns
8 Tesco takes to the skies with home delivery by drone
9 CRH sells Brazilian cement business for $218m
10 Insurers to continue forbearance for customers hit by Covid
Real news has value SUBSCRIBE